Where does Major League Baseball go from here? 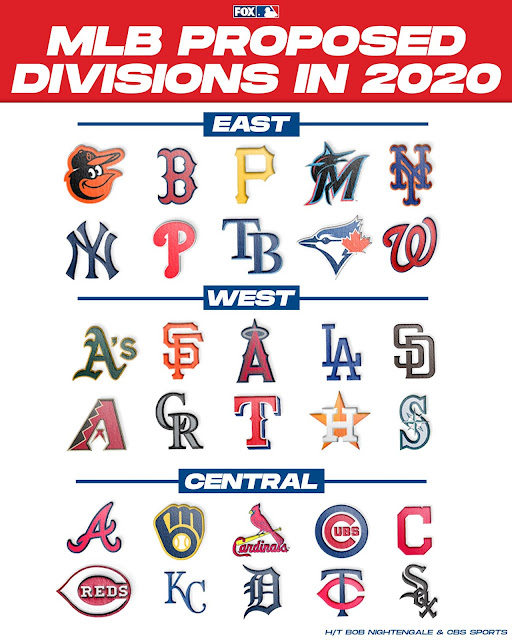 Funny enough Shannon Shark over at Metspolice.com had the same thoughts as I did about this 2020 "realignment". Anyone else feel like the American and National leagues are going to be gone next season? There is a good possibility that there is just the MLB with different divisions and not leagues.  Universal DH? That's going to be the norm. New playoff system seems to be coming in too. I don't think that's going to go away either.


3.  THE CASE FOR RIPPING IT ALL UP ANYWAY
I have written about this several times, and I will re-post below.  Baseball divides up quite  nicely into 25 year eras, and we just closed out 1995-2019.  Time for The Modern Age.  Radical Realignment, Universal DH, and I still say they should look at 7 inning games as the record book was destroyed by The Steroid Age anyway.
5000 B.C. – 1918.   The Prehistoric Age.    We had guys in knickerbockers and a 9 game World Series and the Federal League and Big Ed Walsh won 40 games.  This has nothing to do with anything related to the sport you watch.
1918-1945.  The Diamond Age.   The Sultan of Swat destroyed Home Run Baker’s record by hitting 29 in 1918 and 54 the next year.  White guys played white guys and traveled by train and played day games.   Lots of good things happened in 8 team leagues.
1946-1968.  The Golden Age.  This is the baseball everyone waxes poetic about.  Everyone is back from the war.   Baseball lets black players play.  Subway Series and Willie, Mickey and the Duke, Joltin Joe and West Coast teams and Ted Williams and Roger Maris and all that.  We can argue about 154 vs 162 some other time.
1969-1994.  The Silver Age.   This is the baseball I grew up with.  Guys won 300 games and struck out 300 batters.  You won MVPs by hitting .300 with 30 HRs.  Leagues played by different rules but since they only played each other in the World Series it was almost OK.
Then everything breaks.
1995-2020.  The Bronze Age.   To borrow from Bob Costas, all the great hitters of all time decided to play all at the same time.  Wild Cards and Interleague and some suspect workouts led to all kinds of crazy statistics that have nothing to do with the Golden and Silver Ages which are more alike than the Golden Age is to the Prehistoric Age.  So let’s Put It In The Books and enjoy these 25 years as their own thing and appreciate the great numbers put up by Bonds, Sosa, McGwire, Clemens and even Rafael Palmeiro.
And now on to the future.  We will drag baseball into the 21st Century of short attention spans and more competition and kids who don’t care about the game.
2020-2100.  The Modern Age.   Radical realignment.  Universal DH.  New rules.  16 Team Playoffs.
This is what I think baseball is up to with this plan they floated.  They will use 2020 to wear you down, and by 2021 you will be OK with all the change.
The Baseball you knew is gone forever.  Killed by Coronavirus in March 2020.  Welcome to The New Baseball.

That's it. Time to get used to the new normal as everyone is saying. This seemingly includes baseball.
Posted by Media Goon at 10:02:00 AM