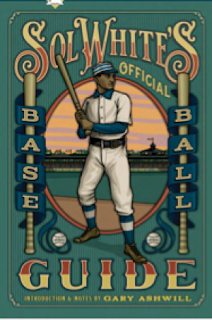 PUBLISHER’S NOTE
Summer Game Books is pleased to be publishing this new edition of Sol White’s Official Base Ball Guide. We have aspired to match the original edition as closely as possible in terms of the exact wording of the text, the cropping of the photographs, and their position in the book.
This edition also features a wealth of background information on both author “King Solomon” White, and the ballplayers White played with, managed, and competed against in the early years of organized black base ball.

Sol White was a star player and influential leader from the 1890’s through the formation and launch of the Negro National League in 1920. But by having the vision to make a detailed record of the greatest players, teams, and feats from this fascinating yet largely unknown chapter of baseball history, his contributions to the game may have a greater impact today than they did 100 years ago. https://www.summergamebooks.com


Sol White was a star player and manager in the early years of organized black baseball. In 1907 he teamed with sports writer and team owner Walter Schlichter to publish the first and only history of the stars, teams, and great feats of the era. The writing is all White’s; Schlicter provided the backing. This unique window into the important chapter in baseball history includes descriptions of the skills and feats of the top players, accounts and box scores of championship matches, and 57 invaluable photographs. Also included are essays by luminaries of the time: Art and Science of Hitting, by “Home Run” Johnson, and How to Pitch, by 1981 Hall of Fame inductee Rube Foster.
The Summer Game Books edition is the first in nearly 20 years. Gary Ashwill, a highly respected Negro Leagues historian, provides an introduction and text notes that include newly-discovered information about the players and events recounted in the book, much of which was uncovered by Gary's own painstaking research into the era. Gary's "Who's Who" section provides fascinating thumbnail biographies of the star players covered in White's guide.
The Sol White Guide is a work of major historical importance.  Much of what is known about the players, teams, and championship series of these early years of professional African American baseball comes from this work.  "King Solomon," White, as he was also known, introduces his book this way:
"I have endeavored to follow the mutations of colored base ball, as accurately as possible, from the organization of the first colored team, in 1885, to the present time [1907]..."
And he concludes his guide with an assertion, proven to be true 40 years later with the arrival of Jackie Robinson:

"For the players of today, with the same prospects for a future as the white players there would be a score or more colored players cavorting around the American League or National League diamonds at the present time."

The introduction by Gary Ashwell


In the spring of 1907 a team called the Philadelphia Giants started selling a small paperbound book at their games. Its cover said it was the History of Colored Base Ball, by Sol White, captain of the Giants, the “World’s Colored Champions.” Inside, the title page named it Sol White’s Official Base Ball Guide, and added that it had been edited by H. Walter Schlichter (who also held the copyright). At 5 3⁄4 by 3 1⁄2 inches, it could be described as a thick pamphlet or even a “brochure,” as White  would later call it.1 The book’s 128 pages were packed with tiny print and photographs illustrating the exploits of professional African American ball clubs and their players going back a little more than 20 years. It also featured essays on “How to Pitch,” by Rube Foster, the best black pitcher in the country, and “The Art and Science of Hitting,” by Grant Johnson, the best black everyday player. Like a game program, it was sprinkled with advertisements, mostly for businesses related to the Philadelphia Giants or run by the owners of other black teams, as well as a few other Philadelphia- area concerns. And for good measure it reprinted “Casey at the Bat” and one of its sequels, “When Casey Slugged the Ball.”

Just four years earlier, W. E. B. DuBois had declared in The Souls of Black Folk that “the problem of the twentieth century is the problem of the color-line.” It was certainly baseball’s prob- lem. The tentative reconstruction era that baseball had under- gone in the 1880s, when dozens of black players, and a fewblack teams, infiltrated the minor leagues and even (briefly) the majors, had shuddered to a halt in the 1890s. The last black player to appear in organized baseball was Bill Galloway, who played in five games for the Woodstock club of the Canadian League in 1899. By 1907 a “veil,” as DuBois would put it, had descended over the world of black baseball. Sol White’s little book was a guide to this world.

You can read more of the intro here.

On a trip to Kansas City last year to watch the Mets play, a while bunch of us went to the Negro League Museum. The museum was very well done and had made me want to read and learn more about baseball's past. I mean I knew some of it, but it got me interested in wanting to know more. Sumer Book Games sent me out a copy to review, and I will. I mean right now we have nothing but time on our hands. If you want to buy a copy you can go here. Maybe we all can discuss this at some point
Posted by Media Goon at 10:31:00 AM