I am sure Dan will eventually want to post something too about this. While it is fresh in my mind I wanted to thank all our fellow Mets fans that have supported the QBC over the years. When we originally started the QBC it was an idea between Shannon Shark of Metspolice.com and myself to try to bluff the Mets into doing a Fan Fest. They shrugged us off. We decided since we mouthed off we have to put our money where out mouths were and we pressed on with our plan. Darren from the7line.com joined in with us and was in the initial planning of the first QBC. He had to pull out of it because of business reasons and Dan Twohig joined in. The three of us were able to pull off the First QBC. While we knew Mets Fans wanted a fan fest, we didn't expect the QBC to have such a good response to how we ran it. We started planning the second QBC after that. The clamoring for the QBC was great and we couldn't believe that the three of us were able to pull off something great two years in a row. Our third year got snowed out. It was also the year that Shannon decided he didn't want to run the QBC anymore. I went from being the guy behind the scenes that was doing all the creative/technical stuff to the guy that had to become the face of the QBC. Shannon was the one footing the bills for the first two QBCs and to his credit, even thought he didn't want to be involved in the planning and running of the QBC he still wanted to help Dan and me in whatever capacity he needed. The duties then became Dan booking the talent, dealing with the vendors, mascots, and the paperwork. I was the one who came up with trying to find the venues, the setup, advertising, coming up with the concepts for the commercials and filming them and logistics. We both had to foot the bill for the events. We have become a pretty well oiled machine even with some bumps along the way.

I don't know if you guys realized this or not, but I have always been a guy that prefers to be behind the scenes. I have never liked being in front of folks talking or doing interviews or even being in front of cameras. The QBC has forced me to deal with and I have become more confident with dealing with folks in general because of it. I can't believe it when people wanted to take selfies with me because I am the QBC guy.

Back to our original goal. Force the Mets to have a fanfest. It took years for it to happen but it happened. So we won. Even though we had to cancel the QBC this year, we got our original goal. I went to the Fan Fest over the weekend and was expecting a car wreck. The Mets pulled off a well run event instead(I did hear that the Mets brought someone in to run it, even though it wasn't me and Dan, I am glad they realized they needed outside help for this, if this is true).

Here's some comments from QBC fans-

As someone who works in sports and tries to focus on the guest experience-I want to say Congratulations 2 the @Mets on a great &well run #FanFest.However it is also important 2 recognize @QBConvention @Mediagoon & @dtwohig for paving the way for this amazing day for #Mets fans 👏
— Dan Malandruccolo (@d_malandruccolo) January 26, 2020 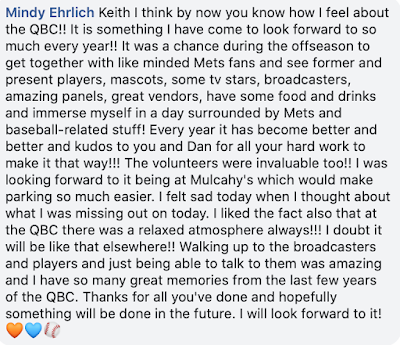 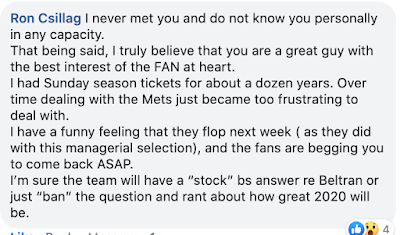 Knowing that we were able to pull this off and have our fellow fans telling us we did a good job makes all the stress and hard work over the years pay off. We are working on something. Don't know when we are going to do it but we are going to something. Thank you to everyone. You along with us, showed the Mets that we wanted a fan fest and because of all of us with the QBC( the folks who ran it and the folks who attended it) there is one now. If the Mets drop the ball with it in the future. We will rise like the Phoenix from the ashes.

One more thing. I want to thank all of our QBC family. Starting with my our family of volunteers.