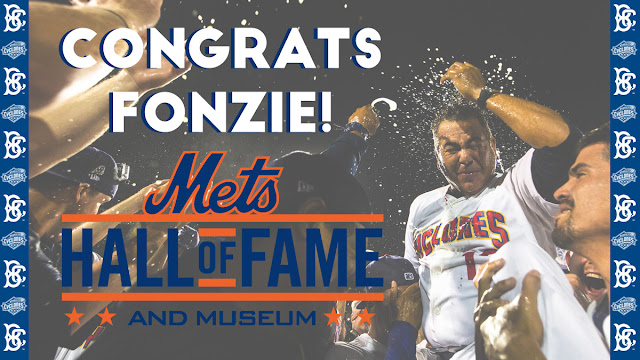 "We at the Brooklyn Cyclones want to congratulate Fonzie on going into the Mets HOF even though we fired him 5 mins after winning a title."

Alfonzo was one of the most clutch performers in Mets history. He ranks first in team postseason history in hits, runs and RBI. Alfonzo homered in the one-game playoff in 1999 at Cincinnati and then slugged two homers, including a grand slam, in Game 1 of the NLDS at Arizona. He ranks in the Top 10 in franchise history in hits, runs, doubles, RBI, OBP, total bases and batting average. Alfonzo won a Silver Slugger Award in 1999 and was an All-Star in 2000.

“Getting into the Mets Hall of Fame is a dream come true for me,” said Alfonzo. “The Mets have had so many great players in their history and I’m so proud to receive this honor. This is something I never thought would be possible when I started out. I was never much for individual goals, I just wanted to help us win. For me to get inducted into the Mets Hall of Fame on the 20th anniversary of our NL championship is a special thrill. I would like to congratulate Ron and Jon on their inductions. I’m really glad that Al Jackson is getting honored. He was our pitching coach for two years and was one of my favorites.”