ICYMI- The @QBConvention/Yahoo Saga from this past year. 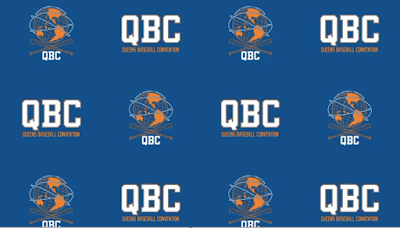 It’s funny that Yahoo and the Mets think that folks are going to pay money for Mets news. I had the  Athletic and it covered more sports then just the Mets and I hated it. Queens Baseball Club eh? With all the other different things the Mets and Yahoo could have to call this new thing they are putting together, they have to call it the Queens Baseball Club or QBC? Sounds familiar. Oh wait, I’m one of the guys who runs the Queens Baseball Convention or QBC. Come on Mets. We know you know about us. You’ve been sending your executives to the QBC for years.

You guys want to sponsor the Queens  Baseball Convention 2020?

It’s another shake my head moment at the Mets.
Here’s is the yahoo/Mets story.

The burgeoning business will begin in Flushing with the Mets. The name of the product will be the Queens Baseball Club.
It will include three writers covering the team, while planning to give members a behind-the-scenes experience, such as access to batting practices, press conferences and front-office Q&As.
The team and Yahoo have a three-year agreement, according to sources. Yahoo declined to say how much it will pay the Mets. The Mets declined comment entirely.
Read the rest here.
From May 15th themediagoon.com
This is a very interesting story.
Since Yahoo Sports announced their plan to launch their new service as the Queens Baseball Club, Dan and I have received dozens of emails, texts, messages, asking how this new QBC was affiliated with our QBC. Now that Yahoo has announced their name change we have been approached asking if we were involved. Rather than have someone else tell our story we wanted to let you all know directly. Below are the articles that talk about the name change.
From the NY Post.

The Mets’ season might be over before Yahoo gets its new paid site started. As one of the Mets’ former managers supposedly once said, “It gets late early here.”
While it was originally announced as the Queens Baseball Club, it is now called The Flushing Meadows Baseball Club. No official reason was given for the name change.
Yahoo will still try to entice people with some insider benefits to go along with its Mets coverage.
“We are working to perfect the product, Flushing Meadows Baseball Club, while it is in closed Beta,” a Yahoo spokesperson said. “We will be launching for all Mets fans very soon.”

The Yahoo Mets site was supposed to be up and ready for business on Opening Day. It was first delayed as it and the Mets waited for MLB’s approval. Now it is just trying to get everything right.

Before the 2019 MLB season began, the New York Mets and Yahoo announced that they would partner on a pay site that would cover the team and provide exclusive videos, podcasts and stories. More than a month into the season, the site is still yet to see the light of day.
The site was originally set to be called Queens Baseball Club. According to the New York Post’s Andrew Marchand, one of the results of the delay is a name change. The site will now be called Flushing Meadows Baseball Club. As for when it debuts, that is still yet to be determined.
The initial delay was for the Mets and Yahoo to receive the blessing of Major League Baseball. Now that it has been secured though, there is still no sign of Flushing Meadows Baseball Club on the internet.

Read more here.In complete transparency on this subject. We have both word marks trademarked. We brought this up to Yahoo when we found out about their Queens Baseball Club and about how similar it was to our trademarks and our brand. We have worked hard at elevating our brand of QBC/Queens Baseball Convention over the last six years and were at first bewildered at the announcement. Yahoo, my partner Dan and myself had numerous phone calls to try to work something out. Yahoo decided that they didn't want to confuse our brands and decided to change their name. Yahoo could see what the QBC means to us and our fellow Mets fans and didn't want to come in and not do the right thing. It is refreshing to see a big corporation come in and try to work with the "little guy".Dan and myself appreciate that they took their time to find a different name that makes their new endeavor stand out and we wish them all the best and look forward to subscribing to their Flushing Meadows Baseball Club when it is launched.Once again thank you to all our fellow fans who support our QBC/Queens Baseball Convention.www.QueensBaseballConvention.com
From the July 3 2019 themediagoon.com

The Post has learned that the Yahoo platform has gone the way of the Mets’ season — down the drain.
“We’ve realized that there are opportunities which have the ability to scale faster and give fans what they want quicker,” a Yahoo spokeswoman said in a statement to The Post. “We’ve learned a ton during this exploration and intend to use these insights to inform the future of the fan experience through Yahoo Sports.”
The Mets declined comment.
For the time being, Yahoo is not doing any deals with other clubs, which was the original plan when the Mets site was announced. Yahoo had plans to be involved in a number of sports.
Yahoo was set to pay the Mets $1 million, but sources said that since there was never a launch, no payments were exchanged. From the beginning, there was criticism that Yahoo was paying for coverage.
The deal’s structure was less about access for its reporters and more about creating events for subscribers with insider access to people like GM Brodie Van Wagenen.
It wanted to start the site during spring training or early in the season, but the finalization of the agreement, which included MLB, took longer than anticipated and the site never went live. Yahoo originally targeted Opening Day to launch.
Yahoo had announced the site as the Queens Baseball Club, but had to change to the Flushing Meadows Baseball Club because it could not get the rights to the original moniker.

We have both word marks trademarked. We brought this up to Yahoo when we found out about their Queens Baseball Club and about how similar it was to our trademarks and our brand. We have worked hard at elevating our brand of QBC/Queens Baseball Convention over the last six years and were at first bewildered at the announcement. Yahoo, my partner Dan and myself had numerous phone calls to try to work something out. Yahoo decided that they didn’t want to confuse our brands and decided to change their name.


Read more about The Queens Baseball Convention and Yahoo here.
Posted by Media Goon at 8:19:00 AM