Is @Aramarksports/@Mets training their staff right? 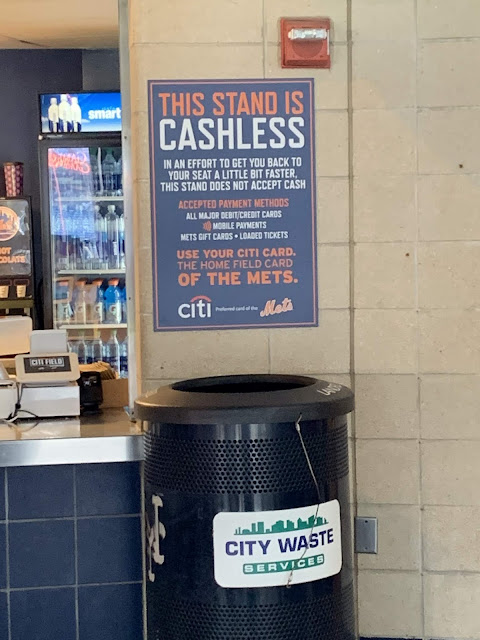 As you see with the sign above the trash can the Mets have some concession stands that only take credit cards, which would be fine except it’s still slow. From what I have heard, the staff at these stands are even slower then if they had cash. Not only that, they also on Opening Day didn’t even put a hot dog in the bun into the Nathan’s box that it slides into. Does Aramark under staff their concession stands? From what I have heard in years past from sources, they do. And it also never seems like they train the new hires the right way either.

Saturday night, I went to the Porsche Club with 11 other folks to celebrate my birthday before the game. We had a reservation  for 6:15pm using open table and got there early and they sat us. We all ordered something to drink and we all decided to get the Market Table instead of entrees that includes the Market Table. Btw, the Market table is awesome and is basically one big all you can eat buffet. Has hot dogs, Mac and cheese, pastrami ruebens, pizza, meatballs, and more. So it’s nice and easy and the waiter is not being overworked by the group of us. The Porsche Clun wasn’t super busy that night, which if it was it would have been fine. We didn’t seee our waiter more then twice. One time when he took our drink order and abs at the end of the meal asking if we wanted anything else. I was so annoyed because he never checked on us to see if we needed more drinks, if we wanted to order more food, or if anything was wrong. Not one time in the forty five mins we were sitting there. The bus boys seemed unsure about picking up plates and refilling water and just seemed not well trained in just bussing tables.  It’s not that hard but I can see it being overwhelming if you are new at bussing tables(I’ve done it.) but the waiter had no excuse not to check on the table.

Maybe it’s early in the season and it will get better or maybe this is just a repeat of what has gone on years past with Aramark. I guess we’ll see.
Posted by Media Goon at 10:52:00 AM