Even though a lot of you don't feel like he is the first baseman especially after for all of last year you couldn't wait for them to get rid of Duda to bring him up. 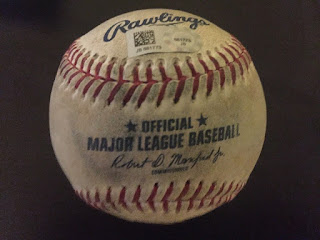 On 08/11/2017, Dominic Smith made his MLB debut for the New York Mets at 1st base. This baseball was collected and authenticated during that game.

Dominic Smith was the 1st round, 11th pick in the 2013 draft. At only 22 years old, he is rated the #2 prospect to play 1st base, according to the 2017 prospect rankings published by the MLB. He was invited to represent the USA in the 2016 Futures game.

Smith is known for his advanced hitting approach, expected to hit for high average and low strikeouts. As the Mets traded away Lucas Duda, 1st base is expected to be Smith's, as he is noted for his outstanding defensive ability.

Among players who began their major league careers with the Mets, only Mike Jacobs (11) and Ron Swoboda (10) hit more homers than Smith in their first 33 games.