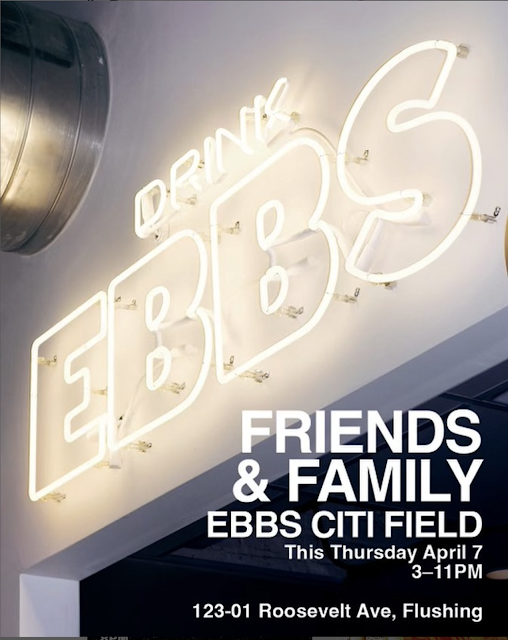 Hey friends and fam! We’re so excited to announce the beer is pouring at EBBS Citi Field this Thursday!! Come celebrate with us 🍻🍻🍻

So this is cool right? A new brewery that was rumored to be setting up a couple of seasons ago where Mikkeller was. Let's see who are the co-founders. Wait. That name. It looks familiar. That's right its a Wilpon. Bruce Wilpon to be exact. Bet you didn't know he had his hand in Mikkellers also? Wait you didn't? Well, just so you guys know the only real dealings I had with Bruce Wilpon is when we did Lunch with Keith Hernandez and he was pretty good with us. So I hope his  business goes well. But just proves you can't get rid of the Wilpons from Citi Field.

The plan for EBBS was to open a tasting room and bottle shop right off the L train’s Bedford stop, in Williamsburg. Like so many things, the global Covid-19 pandemic put New York City’s newest brewery’s plans on hold. But that didn’t stop them from making great beer.

The team, including co-founders Tomas Larsson and Bruce Wilpon, founding head brewer Richie Saunders, and brewer Brian Neville, have already released three IPAs and a lager, named IPA No. 1, IPA No. 2, IPA No. 5, and Lager No. 1.

“The beer itself is unapologetically simple,” says Larsson. “We’re pretty stuck on the idea of not getting caught up in the craft beer arms race of punny beer names and off-the-wall ingredient lists.”

That message is evident even on the beers’ labels, which are all simple, black-and-white designs. I got to try No.1 and totally agree that the beer fits the message: It’s a very good straightforward IPA. No frills or fancy ingredients, just a well-balanced interplay of hops and malt. No. 1 is an easy-drinking (6% ABV) beer, with a floral nose and big citrusy lime notes on the palate. It’s a really refreshing IPA, especially during this hot weather.

EBBS’s mantra is “Born in Brooklyn, Brewed for the People.” I agree that this is a beer that any craft beer fan will enjoy.

I’m really looking forward to trying more from EBBS, and especially to drink some beers in their Williamsburg taproom—I desperately hope—in the very near future! Welcome to the NYC market, and good luck, EBBS!

This was from Where's the beer?