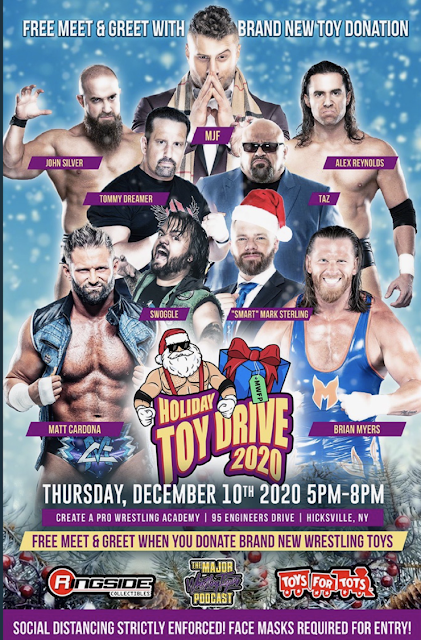 If you are a wrestling figure collector or just a fan of Brian Myers and Matt Cardona then you already know about the Major Wrestling Figure Podcast and their Annual Wrestling Figure Toy Drive that they do for Toys for Tots. In the past they have had a wrestling show and a meet and greet while using toy donations as an admission price to get into the show. These days with Covid-19 and having to social distance the wrestling part isn't going to be able to happen. But, the fellas were able to come up with an idea to still have the Toy Drive happen. There will be a FREE meet and greet and all you have to do is bring a TWO new unopened, unwrapped WRESTLING figure/toys to donate. Who's going to be there for the signing?
Of course Brian and Matt will be there.
AEW's MJF
AEW's Dark Order Alex Reynolds and John Silver
AEW Commentator and ECW Legend TAZ
MJF's Lawyer and MWFP Producer Smart Mark Sterling.
House of Hardcore's/Impact's Wrestle House Host/ ECW Legend Tommy Dreamer
Star of Muppets Two/Star of Leprechaun:Origins/Professional Wrestler Swoggle.
Bring 10 items and you get an exclusive 8X10 that you can have signed by all the guys signing that day.
You can also donate through Ringside Collectibles and the person with the most money donated will win a one of a kind MWFP Championship Belt.
Can't make the meet and greet and still want to just give to kids who shouldn't be forgotten during the holidays? You can send the wrestling toys to their PO BOX(info below). 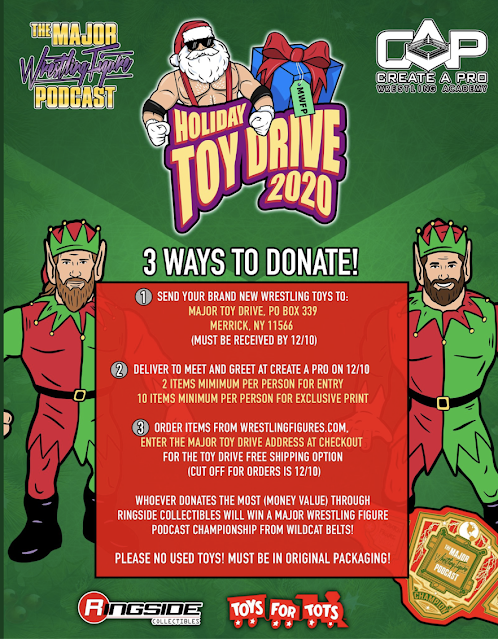