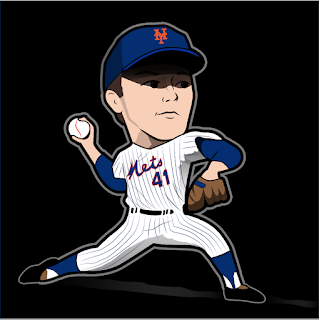 Just to show you that The Wilpons have been constantly held to the fire about a Tom Seaver Statue and that in my opinion that they didn't't care about about The Mets Franchise and the man known as the FRANCHISE. My cousin Shannon has been beating the drum for the Seaver Statue for years and to get it erected while Tom Seaver, his family, friends, and his fans could enjoy it while he was alive. I am so aggravated right now.

It has come to my attention the the Indianapolis Colts have developed statue technology.  This weekend, they plan to unveil a statue for the greatest Indianapolis Colts player of them all, Peyton Manning. I don’t know if you know this (Jeff, Fred, Saul I am talking to you guys) – Peyton Manning is still alive!
Seaver Statue Now.
Why are we waiting on this?
Here’s what’s going to happen.   Some day, hopefully not until many many many years from now, Tom Seaver will pass away.
THEN the Mets will decide to honor him.
Why not do this now?
I have yet to meet a Mets fan who is anti-statue.  We can’t agree on netting or assault weapons but we can all agree on Seaver Statue.
Let’s stop waiting   SEAVER STATUE NOW.
You need an excuse?  1969 + 50 = 2019.   That gives you a year to figure this out.
SEAVER STATUE NOW
From Metspolice.
From 2014
Here’s what we’re doing. We are crowdsourcing 41 ideas for the Mets. The ideas can be big or small. Today’s idea is from @doncheech

Erect a statue for Tom Seaver and have a day to honor him. Can be placed outside the Seaver entrance maybe?

I love this one because one day Tom will be gone and then they will do something.  Let’s do it while we can have Tom at the day.  This franchise doesn’t have much, but it does have The Franchise.
…..

Here’s what I need you to do: email me (shannon@metspolice.com) your ideas. Make my life easy and actually write a few paragraphs about your idea and put your name/twitter handle to it so I can just cut and paste it. I’ll post one idea a day.
Here’s what I need you not to do: waste time with “Sell the Team” or ridiculous trades or general negativity.
The goal here is to crowdsource some cool ideas, publicly post them, and then the Mets can use them or not.
From Metspolice
JANUARY 21, 2019 BY SHANNON SHARK @METSPOLICE

Seaver Statue – @Medigaoon had armed me with what used to be a Tom Seaver figurine, now painted gold, so I sprung it on Mark Fine.  While I did not get the vibe that a statue is in the cards, Mark suggested that Something Seaver Related is coming down the pike as part of the 1969 festivities.  Now before you all run with that, keep in mind that there’s nothing definite there, and keep in mind that what a lot of us hear in the back channels is that Tom is not well….so if you’re imagining some sort of Seaverpalooza I think, unfortunately, you need to temper your expectations and be happy if you get a Tom waves to the crowd.
Watch that panel here.
From Metspolice.
One thing many parks have, that I wish the Mets would have are statues.   There’s no need to go crazy with them, and the Cubs are by no means the only team that does that (I just happened to have a camera with me last week.)
I think a statue of Tom Seaver somewhere between the 7 train and the Rotunda would go along way.   “Meet you at Seaver.”
I guess it would be uncool to have one of Buckner…but man would that be awesome.
www.metspolice.com@metspolice
Please visit www.metspolice.com and help stop black uniforms.

From Metspolice
Posted by Media Goon at 9:42:00 AM