Thoughts on the Passing of The Franchise


Numb. The only way to describe how I feel as I write this is numb.

I heard the news of Seaver’s passing from Keith last night when he texted me (he seems to be my primary news source on all things Mets these days).  I knew this day was coming.  Hell we all knew this was coming for a while.  Doesn’t matter how much you know – when someone who has been an icon in your life passes it will always be a shock.

It probably took about 15 to 20 minutes for it to fully hit, but when it did I am not ashamed to say that I cried.  The tears just came.  Not in any violent, shaking, sobbing way, but in a sad, accepting way.
I sat down by my wife and she just hugged me.  My 10-year old daughter asked me if I was ok, and then hugged me as well.  She didn’t understand why, all she knew was I was sad about something.
And yes, I was sad….and still am sad.

Yesterday was not the first time I ever cried over Seaver.  I also cried in 1977 on the day the Mets traded him away to the Reds.  But that was different.  That was a dagger through my young 10-year old heart.  Yesterday was a slow seeping sadness for times past and forever gone.

Tom Seaver was more than a pitcher for the Mets.  The Mets have always been the underdog in New York.  Seaver was the guy that everyone rallied around to make the team better (or at least seem better).  He was our shining light when all else was dark.
Now that light has gone out.
I met Tom twice.  The first was a very brief passing.  The second was at a 50th anniversary of the Mets celebration at CitiField in 2012.  Seaver was there with maybe 20 others from the history of the club, including Willie Mays.  But Tom was the star that day.  I remember as I watched him and spoke to him sensing that something was off.  He was great, friendly, gregarious, but something wasn’t right.  As it turned out my senses were right and that would be the last public signing Tom would ever take part in.

The stats will show that Tom Seaver won 3 Cy Youngs, 311 games, and led the Mets to the World Series.  My heart knows that he was more than that, and I am forever grateful to have seen him pitch and to have met him, and thanked him for what he meant to me. 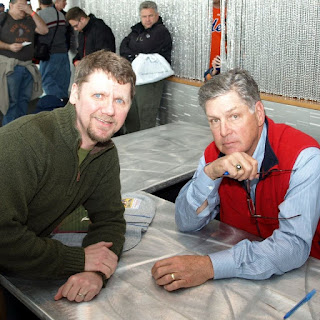