@QBConvention: QBC 2020 has been cancelled. Refunds will happen for tickets that were purchased.

It is with a heavy heart that I have to make this announcement on behalf of the QBC. QBC 2020 has now been canceled. Part of it is due to a scheduling conflict behind the scenes and part of it seems to be a lack of interest in 2020's event.  Ticket sales have been struggling, we don't know if it was because the location, the guests, the pricing, or the Mets Fan Fest. The lack of ticket sales and trying to fix the scheduling conflict would make Dan and myself lose way too much money personally. We are losing a ton of money already from the QBC. We don't want to have to go into our own pockets to cover the loss. The Mets finally realized that the fans wanted a fanfest and would go to one. After QBC 2019 they saw how much fun it was for fans and that it would be a good public relations move to host one. I guess we "won" in trying to get the Mets to do one. It only took seven years though.We have always said we would keep doing the QBC as long as our fellow fans wanted us to. There are a number of you that have supported us since the beginning but it looks likes the majority have spoken. We are not saying that this is the end of the QBC, but we are going to go on hiatus this year and reevaluate what the QBC Brand is going to be going into the future.

There are no sour grapes here. We always wanted what was best for the fans. Refunds will start going out over the next few days. Thank you for understanding.

Again thank you for the years of support. We appreciate you all.

Are we getting a refund?

Yes. Sending them out now. We have to do them one by one. This will take a few hours today.

Is this because of the Mets Fan Fest?

We don't know if that is the reason or not for strong starting off sales and then sales trailing off, but we weren't able to have the title sponsor that we have had for the last few years that helped us promote the QBC.

Are you mad at the Mets?

Mad isn't the right word. Our initial intention was to bluff the Mets into doing a fan fest years ago. They told us that it Mets fans don't want to go to them. We proved them wrong. They realized this and started their own. So we "WON" with our original goal. They asked us if we wanted to join them, we negotiated with them, they didn't want to pay us any money to help out, so we said no to them. One of the reasons we got off to a late start with the QBC is because we were trying to work with the Mets and we couldn't pull the trigger on a lot of things earlier. I think there is two words for this to tell you guys the truth. One is Pride. Pride in knowing that we know what Mets Fans want. And Annoyance. Annoyance in the fact that we look forward to this every year now and that we can't hang out with our fellow fans using our vision.

So, even in thus negative time, we wish the Mets and our fellow fans a good time at the Mets Fan Fest.

Here is the official Press Release. 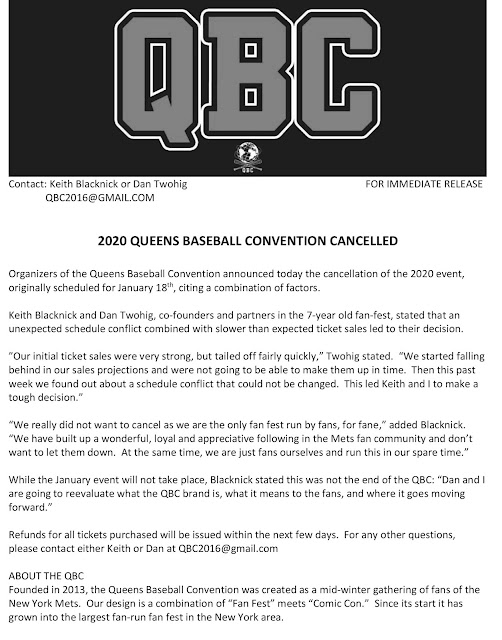