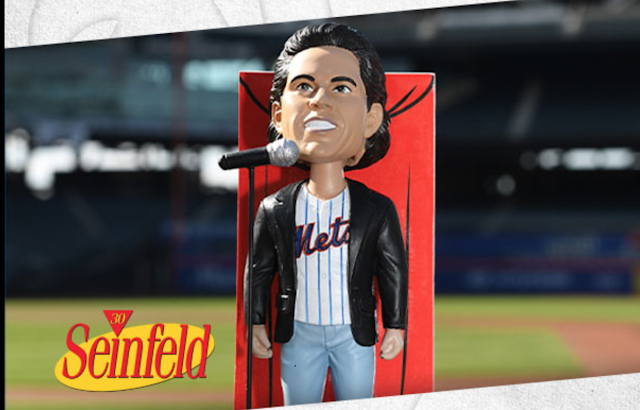 FLUSHING, N.Y., MAY 16, 2019 – In honor of Seinfeld’s 30th anniversary, Sony Pictures Television (SPT) and the New York Mets announced today a new partnership that will bring “Seinfeld Night” to Citi Field. Jerry Seinfeld and Keith Hernandez will reunite for a day about nothing on July 5, 2019 (30 years to the day of the premiere of the iconic show on NBC) when the Mets host the Philadelphia Phillies at 7:10 p.m. This kicks off a series of initiatives in New York as part of SPT’s yearlong celebration of the 30th anniversary of Seinfeld.

The Mets will kick off the night with a Jerry Seinfeld co-branded bobblehead, available to the first 25,000 fans who arrive at the ballpark.

Fans are encouraged to watch every episode before they arrive, from The Chinese Restaurant to The Hamptons, as attendees will be tested on their Seinfeld knowledge with trivia hosted by lifelong Mets fan Jerry Seinfeld. In addition, the infamous Soup Nazi, Larry Thomas, will be on hand greeting fans on the concourse.

“Two of my favorite things in all the world are the comedy arts and my New York Mets. This is one moment that I am very happy to have my ‘Worlds Collide’!” said Jerry Seinfeld.

“This is an exciting announcement for us,” Executive Vice President & Chief Revenue Officer for the Mets Lou DePaoli said. “Seinfeld and the Mets are a natural fit and we are extremely happy to be able to put this together. Our fans are going to love what we have in store for them, so giddy up!”

Tickets for “Seinfeld Night” are now available at mets.com/seinfeld. In addition, special V.I.P ticket packages with exclusive benefits will be announced at a later date.

Keith Hernandez is going to be a part of this? You know who else is having Keith Hernandez around? I am. It’s the QBC presents a Lunch with Keith Hernandez. For info and tickets got to www.QueensBaseballConvention.com
Make sure you check out our sponsors @Mikkellernyc and @snytv
Posted by Media Goon at 1:55:00 PM