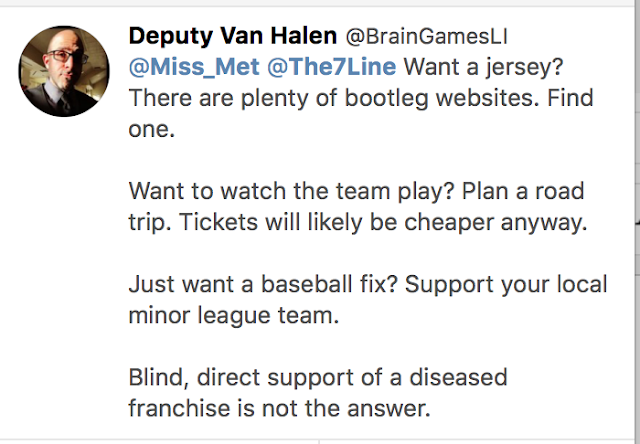 #MetsFansUnited folks, you and I don't see eye to eye on a lot of your stances or ideas(I have made it common knowledge) but this guy is really going overboard. He needs to be reined in a bit. Seriously dude, do some research.

Want to teach @BraingamesLI about the central fund? Or how road teams split the gate when they visit other ball parks? Hmmmm one of the local minor league teams in NYC is owned by the Mets too. But let's get to the meat of this post. This guy wants you to buy jerseys being sold by criminals. The people that sell these bootlegs are into human trafficking, terrorism, money laundering, human rights violations and more. But let's stick it to the Wilpons buy buying overseas.

From Complex.com. There is a great video on there about this topic too... Link is at the bottom of this post.

That amount of money, much of it almost impossible for authorities to trace, attracts criminals looking to fund other illegal activities. Examples like the Charlie Hebdo attack, while not unheard of, are unusual, not only because of the extreme, public nature of the attack, but also because of the clarity of the link between the sale of counterfeit goods and the endpoint of the money trail—in this case, guns and a grenade launcher. Often it’s much more difficult to connect those dots, although they are most certainly connected in some way. According to Foucart and other experts interviewed for this story, profits from the sale of fakes have been traced back to sex trafficking, identity theft, gang violence, and the global drug trade. “Criminality begets other criminality,” he says. “Generally, what we see is a lot of these criminal organizations are not only involved with just counterfeiting.”
In some instances, counterfeit goods are produced in factories that rely on child labor and operate under sweatshop conditions in developing countries. “There are a lot of ugly things that go on to make this allegedly beautiful bag,” says Peter Moreno, a retired NYPD captain with 30 years of police experience, including investigating the sale of counterfeits on the New York subway system. “There's all kinds of kidnapping, dirty money.” Despite the relative ease with which shoppers can purchase these fake goods—on Instagram or picked up at a flea market in broad daylight—and the lack of consequence that ease seems to imply, doing so is far from a victimless crime. And it harms many more than just the companies whose profits are affected and whose creative work is ripped off. “The ultimate victim—or I should say, victims—in counterfeiting includes everyone involved,” Foucart says. “Everyone is harmed all along the way.”

Yep a victimless crime here folks. "Hey Wilpons, we are really showing you!!! Who cares about real crime instead of the perceived crime of you guys not caring about a team that we can really walk away from if we want to." Too bad that the victims of counterfeiting can't walk away from it.

What about a person who buys something counterfeit online?


Lauren, 30, a Chicago resident who works in advertising, bought what she thought was an authentic Canada Goose down jacket from an ad she saw on Facebook. “It took me to a website that looked just like the real Canada Goose website,” she says. She purchased a $300 women’s size XS jacket from the site. When it arrived at her apartment, the jacket was shoddily made with a crooked logo patch on the sleeve. It was also a men’s size XL.
Lauren reported the ad to Facebook and tried to get her money back from her bank, a task that was difficult without being able to find the site again. She also didn’t receive a confirmation email. The return address on the shipping label appeared to be a nonsensical translation from Chinese to English, making it nearly impossible to determine where the package originated. Not that it would have made much of a difference. “The addresses are fabricated. The addresses are in the wrong country,” Goldsmith says of similar direct-to-consumer shipments she and her clients have attempted to trace. “The addresses will give you the right town, but the street name doesn’t exist. The company name can be incorrect. It’s a total fraud.”


Reports of other types of crime around the world intertwined with counterfeiting are readily available, though. Per the UN, 49% of IP investigators in the UK said they had worked on counterfeit cases that also involved money laundering. Italian Intelligence says “almost all” of the country’s bootleg industry is run by the Mafia. Another UN report mentions Chinese gangs with ties to Italian counterfeiting experts forcing “smuggled migrants into prostitution and low-wage labor.” Sales of pirated CDs have been linked to funding the 2004 Madrid train bombing, and investigations firm Carratu connects money from counterfeit goods to Hezbollah, Al Qaeda, the Japanese Yakuza, the ETA, and the Russian mob.

In her book Deluxe: How Luxury Lost Its Luster, Dana Thomas relays the description of a Thai counterfeit factory given to her by an investigator who found seven children under the age of 10 building fake designer handbags. “'The owners had broken the children's legs and tied the lower leg to the thigh so the bones wouldn't mend,’’ she recalls him saying. “‘[They] did it because the children said they wanted to go outside and play.’”

Yep. So worth buying a bootleg to show the Wilpons that you want them to be better owners.

Consumers still tempted by the flash of wearing a designer logo from their arm by any means can consider a question Elia poses: “If you find a fake Louis Vuitton for $26,” she asks, “what is the human cost?”

Read more of this story from Complex here

So, please tell me how this shows the Wilpons?