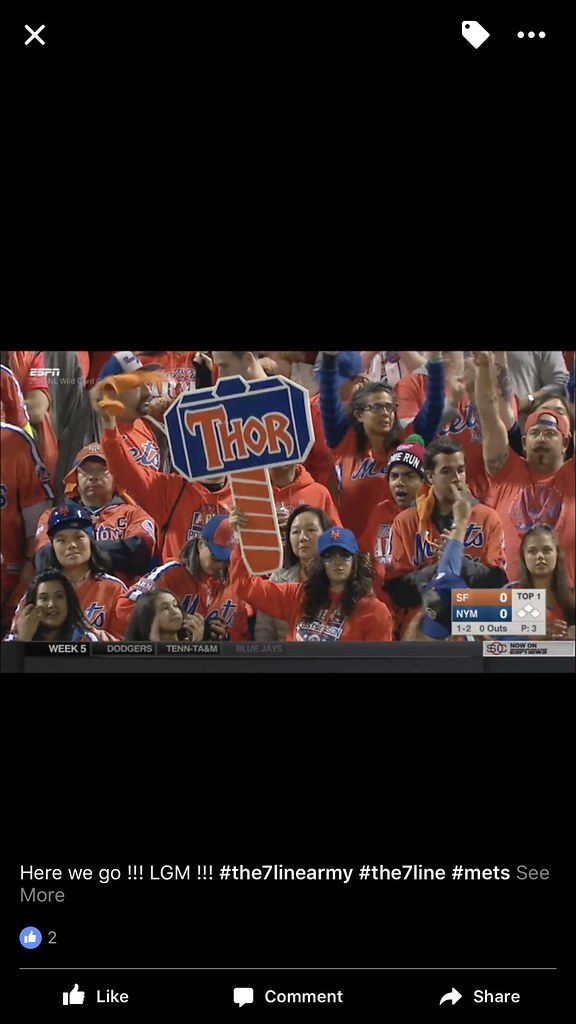 METS SHUTOUTS: It's the sixth time that the Mets have been shut out in a postseason game...The last time it occurred was Game 3 of the 2006 NLCS at St. Louis (5-0).

NOAH SYNDERGAARD: Tossed 7.0 scoreless innings and allowed two hits in a no-decision...Struck out a postseason career-high 10 and walked three...Did not allow his first hit until a Denard Span single with two outs in the sixth inning...Has a 2.42 ERA (seven earned runs/26.0 innings) in five career postseason games (four starts)...Is the third Mets pitcher in postseason history to work at least 7.0 scoreless innings and allow two or fewer hits...The other two were both complete-game shutouts (Bobby Jones in Game 4 of the 2000 NLDS and Jon Matlack in Game 2 of the 1973 NLCS).

GIANTS IN POSTSEASON ELIMINATION GAMES: The Giants improved to 20-17 all-time in elimination postseason games...The Giants have won each of their last nine elimination games in the postseason (six in 2012, two in 2014 and tonight's win).

GIANTS IN THE PLAYOFFS: Beginning with the 2010 postseason, the Giants are 35-14 in postseason play (19-7 on the road)...San Francisco has won 20 of their last 25 postseason games.

MADISON BUMGARNER: Tossed a 9.0-inning, complete-game shutout to earn the win...Struck out six and walked two...With his nine scoreless innings tonight, Bumgarner has not allowed a run in his last 23.0 postseason innings...Improved to 8-3 with a 1.94 ERA (21 earned runs/97.1 innings) in 15 games (13 starts) in his postseason career...Bumgarner's 1.94 postseason ERA is the third-lowest in major league history (min. 10 games started)...Over his last nine postseason games (seven starts), Bumgarner is 6-1 with a 0.79 ERA (six earned runs/68.2 innings).

BUMGARNER ON THE ROAD IN THE POSTSEASON: Now has an 0.50 ERA (three earned runs/53.2 innings) in eight postseason road appearances (six starts)...The Giants are now 8-0 in his eight road postseason appearances.

CONOR GILLASPIE: Hit a game-winning three-run homer in the top of the ninth inning...Is on his first postseason roster and was playing in his first career postseason game...It's the sixth go-ahead home run in the ninth inning or later in Giants' postseason history...The last such home run was hit by Travis Ishikawa in Game 5 of the 2014 NLCS vs. St. Louis (that home run was a walk-off home run that ended the series and advanced the Giants to the 2014 World Series).