The Mets Season is over 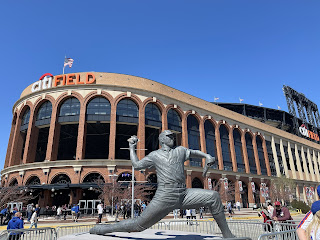 After not being in the post season since 2016, the Mets made the post season. Was it the ending any of us wanted? Nope. What happened to “These Mets”(btw still a dumb slogan)? They ran out of steam. Injuries caught up to them. They looked tired. It seems like not having any real stretches of losing caught up to them at the end of the season and the playoffs. Could stuff gone better for them? Sure. But think about it like this. I didn’t think originally that the Mets were going to the NLDS as a bye this season. I knew in my heart they’d make the playoffs and they did but boy did they tease us along the way this season.

Let’s look at the fun we had all season. It was a blast going to games not being the lovable losers and actually have a team with a winning record. One of the fans I was sitting with had such a meltdown last night and as a grown adult it was embarrassing. Yelling about how the team sucks, how much he hated the team, swearing, and basically throwing a tantrum. If this is what the Mets do to you, it might be time to step back and reevaluate some things.

Anyway. I had fun for 99 percent of the season. Even with the Mets and their losing in Black jerseys.

Let’s all reset and hangout at the QueensBaseballConvention.com on December 3rd.

Also the NY Post Sports Plus App has returned as a sponsor.