This is the latest I found about the Willets Point Project. It's dated Sept 30th 2022. 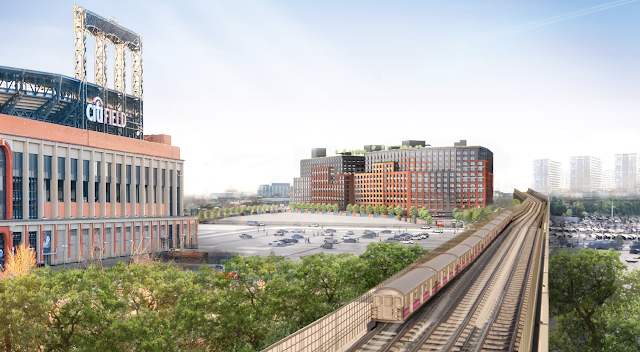 THE DESIGN CONCEPT FOR THE FIRST PHASE OF THE WILLETS POINT REDEVELOPMENT PROJECT, rendering VIA EDC
This is from the Queens Eagle

The new designs come several weeks before the EDC is scheduled to present its plan for approval to the city’s Public Design Commission.

The beginnings of the Willets Point redevelopment date back to the Bloomberg administration. Plans to transform the 23-acre, city-controlled plot that sits in the shadow of Citi Field have come and gone – including a proposition to build a shopping mall there, which was struck down in court in 2017.

Most recently, rumors of a bid to build a casino in the area stemming from new Mets owner Steve Cohen have begun to swirl. Officials at EDC, however, say even if a casino were to make it to Willets Point, it would have no effect on the work currently underway and up for review by the PDC on Oct. 11.

The plan for phase one of the redevelopment – six of the total 23-acres of city-owned land – includes 1,100 units of affordable housing, with a number of them designated for seniors. It also includes over 22,000 square feet of retail space, around 5,000 square feet of community facilities, over 30,000 square feet of open space and a new K-8 school with 650 seats, which is being designed by the School Construction Authority in a separate effort. The affordable units will rent from a range of below 30 percent of the area median income to over 100 percent of the area median income. Under the new plan, phase one of the project will be leased for 99 years to the Queens Development Group, a partnership between real estate giants Sterling Equities and The Related Companies.

In addition to the new structures, the development of the area requires the creation of new physical infrastructure.

The developers are tasked with building new streets, sidewalks and utilities, including a sewage system, which the tenants of Willets Point, most of whom are auto shop workers, have long been without.

According to the design plans presented on Wednesday, an existing water main that runs under Willets Point Boulevard toward Flushing Creek will be reconstructed. A brand new sanitary sewer will be installed along Seaver Way and head toward the Flushing Bay – auto shop workers who worked in Willets Point would have to go to nearby businesses to use the bathroom for years.

THE CITY reported in April that Cohen had met with Mayor Eric Adams earlier in the year to propose one of New York’s two new casinos be built either in the Citi Field parking lot – which is owned by the city and that would likely be subject to a successful legal challenge – or in the non-city owned portion of Willets Point, which Cohen would have to buy.

I wonder when the whole parcel of land will be developed. I feel like I might be in my 60's when its finished.

Bring the Jets back.

I’m assuming to make those living in affordable housing uncomfortable? You’re a real piece of shit who I hope gets no peace.

First of all language. Second of all what does bringing the NY Jets back to Queens have to do with affordable housing?