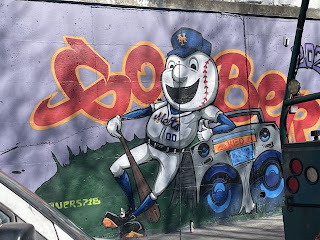 I’m not going to sit here and blame the Mets for the ticket prices because I know that it’s MLB who prices them out. My gripe is going to be to MLB.

Here is a problem with the sport. You have a wife and two kids. You have season tickets which consists four seats to a game. You get hit with the invoice for the post season which the ticket prices are astronomical even with the plan holder discount. I’m just going to do rounded up numbers here but if you are in the 100s you are looking at around 10 grand for four seats. The price comes down a small amount because the Mets probably aren’t playing the wild card games. So subtract about $1250 from the cost. You are still looking at $8750 to lay down for playoff tickets. That’s a big chunk of change there in this economy.

Now say you only get two strips instead of the four you had in your plan.. How do you decide which kid gets to go with you? What if the one kid gets to see the Mets win the World Series and the other kid is at home watching it on tv. I can see that as a serious way of “breaking” a kid’s fandom. Baseball is already having problems with the ages of the fans. They aren’t creating new ones, especially making it so expensive to go to games.

I remember being able to go see the Mets play the Astros in 1986 for one of the playoff games. It was amazing. It was one of the things that helped cement my fandom of being able to see something cool like that. The 2015 post season strips were expensive but didn’t feel out of control expensive to me. These feel like FU to the fans.

I’m trying to figure out if its worth me getting the strips especially with my work schedule. And one more thing MLB, can we grow the sport again before it dies off like the dinosaurs?

People that have plans go to half and sell half. Darren needs to be more flexible. From what I understand if you sell on Stubhub, he will remove you from the group. Very few people can afford to attend or want to spend the money to attend every game. Those of us that don't have to worry about what Darren thinks will make enough money to see our post season games we attend for free.

Going to sporting events or concerts these days are really expensive.So there are 2 choices 1) don’t attend or 2) earn more money, Unfortunately this is the way it works.

Tickets are priced very comparably to regular season tickets. The only reason to have season tickets is for the right to buy playoff tix

Because Darren makes money off the same fans backs that he says can’t resell to make a profit like he does!! And why is he on social media plugging Tick Pick???

Four tickets is a lot of tickets. It’s going to be costly. We have 3 in our family and only buy 2 tickets.

In 2015 I had a 5 or 6 game mini package. I got every game for all the playoff and world series games though not in the same section. The following year I had a 20 game plan and didn't get to see the wild card game which the Mets lost, and I didn't have tickets to all the games. Go figure

Since Darren is one of my good friends, I’ll defend him here. The whole point of the 7line section is to be all Mets fans. How can you control that if you sell that on Stubhub or any of those other resale sites. The T7LA are supposed to be diehards that wouldn’t be selling their tickets to other teams fans. As for making money off fans, do folks start complaining about The QBC making money off of fans? If you put the work in and make your product successful why shouldn’t you be able to make a living off ot it? I put the money down for my playoff strips knowing full well that I won’t be able to make some of the games, but I know I can make some other Mets fans/T7L fans happy by selling them at face to them.

The prices aren't crazy, you just have to understand it's a LOT of potential games. The only way you have to pay that full price is if every game gets played AND the Mets are the home team to each series. That's 14 games (3+3+4+4). You're talking about roughly $180/ticket trusting your pricing and not even adjusting for differing costs between wild card round and world series. That's not unreasonable. I sell off some tickets because I can't reasonably attend every single postseason game, and even if all I do is sell them at face value it's suddenly very affordable. If you can make some money, even better.

Look, at the end of the day this is a luxury product. You can have a perfectly fine family night watching this game on TV on a giant 60"+ HD screen. Pick a couple of the games to go to live and sell off the rest.

Darren isn't trying to kill your ability to make money, he's trying to keep that particular section to be representative of T7LA. Can you imagine if those tickets are on Stubhub en masse and the next thing you know there's a slew of Braves or Phillies fans in there? It would be a complete disaster.

If you purchased the playoff strips you're now wondering why. There are plenty of tickets still available via the Mets and less expensive versions on StubHub and other resale sites. Why are there so many tickets available for these playoff games?