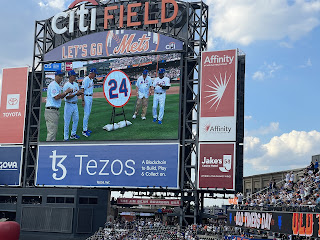 Old Timer’s Day was one of the things Shannon from Metspolice and myself had fought for years to have brought back during the the Wilpon Regime and were told the fans don’t want that. They also said the Mets fans didn’t want a Fan Fest and that birthed the QBC. Anyway besides the hiccups with the parking lot opening after the “red carpet” and the the red carpet arrival not being something that should have been advertised(it literally was 30 seconds and done) the Mets and Steve Cohen did a great job with the event itself.

Every decade of the Mets existence was represented by players. Players that are in ill health or have passed on were represented by their families. The opening ceremony was fun and I’m not hear to debate if Willie Mays number deserves to be retired or not it was nice to see a surprise sneak in and not be leaked. I heard it was kept secret to a lot of folks in the organization.

The Old Timer’s game itself was fun. Great to have Howie and Wayne doing live play by play to the crowd and they were having fun with it. The players looked like they were enjoying having with each other and getting the love from the crowd. I’m not going to go into crazy detail about what went on but if you missed it, the whole shebang should be on Mets YouTube.