The Mets will host division rivals Atlanta, Miami and Washington during the exhibition season and make one trip to the west coast of Florida for games at Atlanta in North Port, FL on March 23 and Tampa Bay in Port Charlotte, FL on March 24. The 2023 Spring Training schedule includes six weekend home games.

New York is scheduled to play 30 exhibition games in 2023, including 16 home games in Port St. Lucie. The Mets will face the Houston Astros, Miami Marlins, Washington Nationals and St. Louis Cardinals six times each and the Atlanta Braves and Tampa Bay Rays twice each.

The remaining two games on the Mets spring training slate will be played against World Baseball Classic teams at Clover Park in Port St. Lucie. Additional information, including the WBC teams, will be announced in the coming months.

The 2023 Spring Training schedule is subject to change and game times will be announced a later date.

Spring Training season tickets will go on sale on October 4 at stluciemets.com. Additionally, mini plans and individual tickets will be made available later this fall.

The 2023 Spring Training schedule is attached. 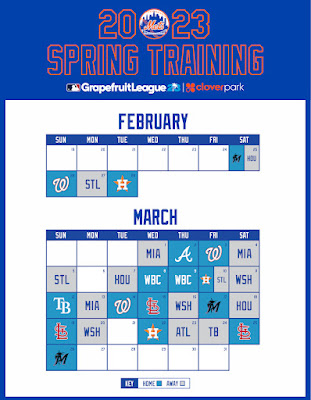