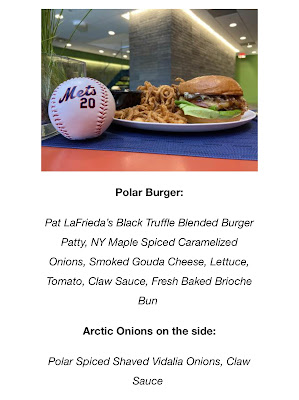 I came to the game tonight and I wasn’t planning on getting the Polar Burger but there was no line so I figured why not. Boy was I disappointed. First of all the burger is 1640 calorie. And can I just tell you that for the amount of calories in this concoction vs the taste, it just wasn’t worth it. I grabbed the burger in the top of the second and it when I got back to my seat in the Big Apple Reserve to eat it, it was luke warm.

The taste of the burger patty itself was pretty bland. I was bummed out about that because it was a pretty thick burger and I figured that was going to be a good sign that it was going to be good. Nope. I was wrong. The onions and sauce were okay but didn’t really help the overall blandness of the burger. The Emmy Squared burger from two seasons ago was 1000 times than this.

Maybe I’ll give it a second chance later in the season but my first impression is that it’s basically better than the normal Citi Field burgers from the stands but isn’t anything to write home about.

I can't describe it.