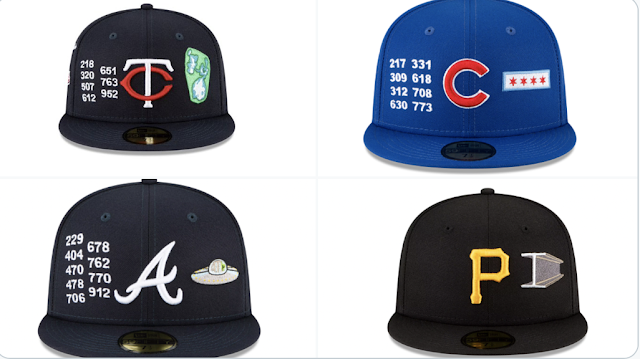 Twitter was used for good today it seems. Metspolice and I have been killing New Era for years with some of their designs over the years. After the designs were released today it looks like after getting destroyed on twitter New Era isn't so proud of their designs and aren't releasing them.

May 25 may go down as a special day on MLB Twitter. It was the day that the group successfully clowned a product line to death.

The ill-fated product line in question was the "Local Market" collection from New Era, the official cap supplier of MLB. The company has created quite a number of caps over the years — some good, some not so good — but it was hard to remember any of them immediately sparking such a measure of mockery, indignation and bafflement.

Simply put, the caps were a mess. They were such a mess that it was hard to imagine any New Era employee thinking they weren't a mess; the mess felt like the intended feature of the group of 30 hats.

The overarching theme was basically area codes and clip art. Most (but not all!) caps featured anywhere between one and nine telephone area codes on the front, with some perplexing omissions (the Tampa Bay Rays hat didn't feature the area code of their actual stadium).

(Don't worry. There are screenshots.)https://t.co/Vaj2psnmQg

Yep, no idea why there’s a UFO there. Also, wtf is the thing on the back left? pic.twitter.com/z7xNUca5qP

*A cheeseburger, which is not a Jucy Lucy as the cheese is outside the meat, and also nobody actually eats those

*3/4 of the Chain of Lakes pic.twitter.com/Q5YdBhuBkZ

Ok they definitely told the hat designer to just wing it lmao
-1776 (15 years before DC existed)
-cool WS Logo but why wrote “washington D.C.” in a completely new font when the actual team font is used for the word “Washington” on the back
-What does a hot dog represent here pic.twitter.com/t3xojXagyZ

IS THAT A FUCKING STEEL BEAM?? A beam. Of steel. Also why is the @Pirates hat the only one without area codes? I feel cheated #412 @NewEraCap pic.twitter.com/hAjLlMuVJG