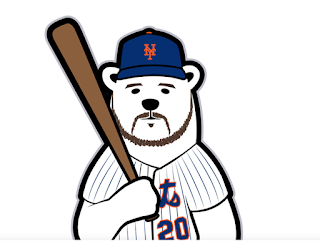 @Grafixjoker on twitter has become a buddy of mine over the past year and I have seen his stuff that he has created stolen and sold by websites that shouldn't be. They didn't have his permission to do so and it sucks for artists like him. Seeing someone profit from your work and you not seeing a dime from it and you can't really do anything about it because these websites usually don't care. They gt a cease and desist and stop from when they get that letter but the damage is already done. Before I get into the whole twitter/IG debacle, I found a website that was selling one of Joe's images on tee shirts without his permission. This is while I was looking for an image to prove something. The website had a chat function. 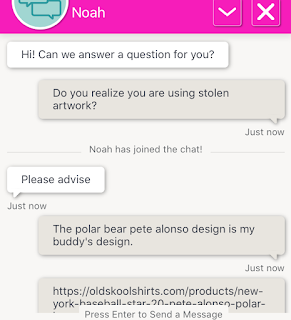 I find it funny that a guy named Noah answered this. 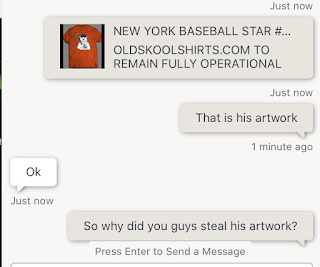 You know Noah is trying to scramble to see what is going on. 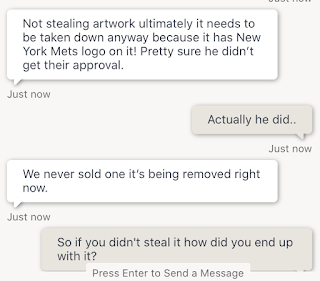 Joe has never sold this design. He did it for fun and he knows about Trademarks and what he can't use.

They ended up taking it down. I have to say it was one of the quickest times this has ever happened.

So now back to the twitter being weird. There is this account on instagram with 75k followers and less than 3000 followers on twitter. That seems very off to me. Anyway I have no problem saying that the account is NYM_News. He promoted a site that was selling Grafixjoker's Polar Bear Pete Alonso design as a print without permission. it's the same design from the pics above. Now the kid/teenager/person pulled down the tweet/IG post once myself, Grafixjoker, and thatmetschick hit him up to ask why is he promoting stolen work. The kid said he didn't know that it was Joe's work and her apologized and took it down. He then got mad at Bre/thatmetschick because she didn't praise him for taking down the post because it was a bad look on him. Newsie was saying that he had no idea it was Joe's work at all. Hard to believe because the design has been around since last year, went viral, and even Alonso was loving on it. And if this person says he has sources and he is all plugged into Metsland he would know this. 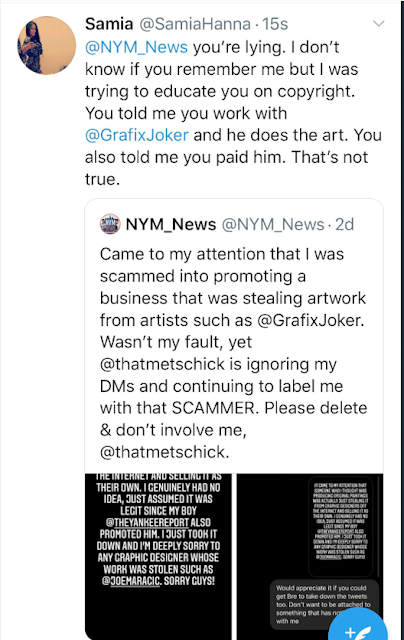 This is after he said he didn't know it was Joe's work someone @Samiahanna called Newsie out about saying that Joe has worked with him. 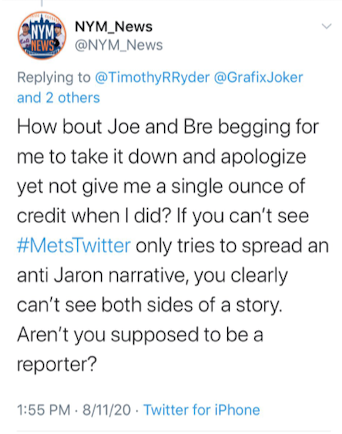 I don't remember any of us begging for him to taking it down. I remember us calling him out how he was promoting the account who stole the image.