Former #Mets second round draft pick Andrew Church, who was among those released today, offered some honest opinions on the state of the organization and player development system via Instagram.

Let's check out what was said. 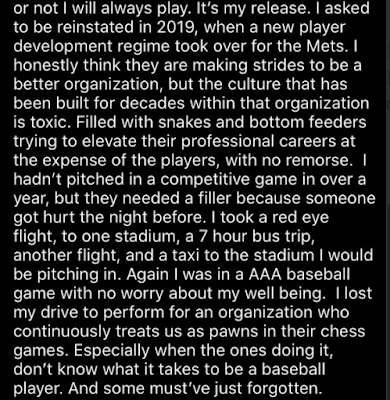 You guys should read the whole post. "Bottom Feeding Snakes." "Torn UCL but the team wouldn't let me go to the doctor and wanted me to pitch in High A ball because they were in the playoffs. When I said no, I was made to be the bad guy." "Big non playing baseball name comes in gets paid, and takes jobs away from guys playing the game their whole lives."

This needs to be picked up more.

Also now the MLB announced about the draft being 5 Rounds and on June 10th. They can' even figure out how to have an agreement with the MLBPA to get the season started.

MLB officially announces that the 2020 Draft will be 5 rounds. MLB Network and ESPN will each produce live Draft coverage on Wednesday, June 10th, marking the first time that multiple networks will provide live primetime coverage of the MLB Draft.
— Maury Brown (@BizballMaury) May 29, 2020

Here are the players released according to Michael Mayer,