Baseball- Who thinks it going to get played after this?

Who do we think the villains of this story is? 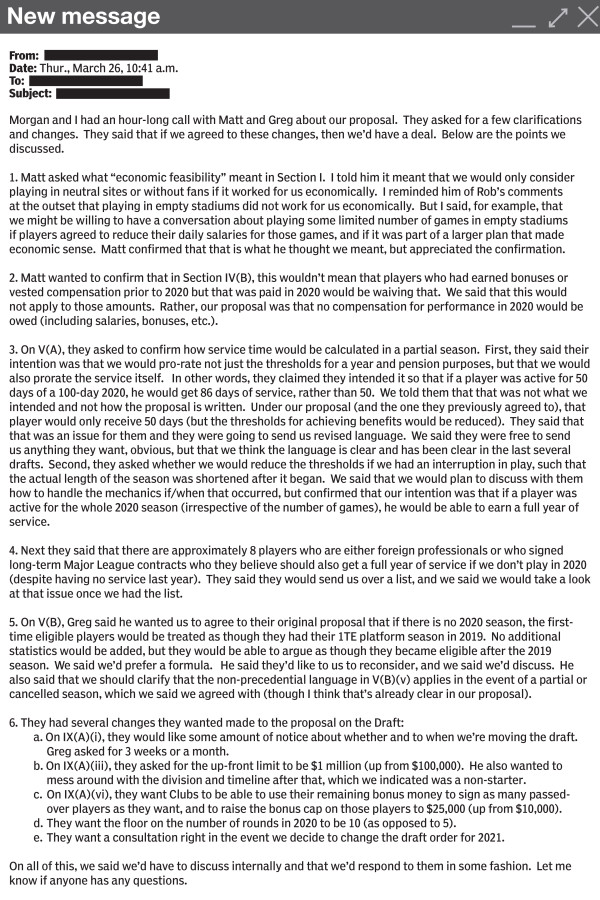 The Post, however, has obtained a March 26 email from an MLB lawyer to top league officials that documents the substance of talks between two MLB officials and two MLBPA officials from earlier that morning. The email covers seven points, including that MLB explained to the union officials that MLB would need a second negotiation if games were not played in front of fans to determine pay and claims that union officials understood that concept.
Thus, the email seemingly offers evidence that the union was aware that further talks were potentially necessary.
The two sides had a formal negotiating session last Tuesday in which MLB laid out extensively its proposal for restarting the game focusing on safety and health guidelines The sides also talked economics, but MLB did not make its expected proposal for a 50-50 split in revenues this year. The sides have not formally spoken since, with the clock ticking if MLB actually intends to begin a second spring training in mid-June and start the season the first week of July.
The staredown and absence of talks is based on neither side wanting to flinch on economics. Players Association executive director Tony Clark and powerful agent Scott Boras have been publicly strong in stating the matter of salary already has been determined for a 2020 restart and no further negotiations need be held.

“The contract itself is very clear that in the event of a partial season players will get paid pro rata salary — whether with fans or without. And it doesn’t require any further concessions on pay from players who have already agreed to give up billions of dollars in salary in the event of a partial season in which they would be taking on unprecedented risks and burdens. Having said that, both sides are free to make any additional proposals they want. If they have a proposal on economics they should make it as we’ve repeatedly invited them to do. We have the right to respond to it. Despite all their posturing they still haven’t done so. Rather than actually negotiating over these issues the league is focusing on leaking self-serving internal memos to the media. Public posturing is not going to help us have a season.

“That the Commissioner’s office has claimed it needs additional salary concessions should not be surprising to anybody. But there’s a difference between what they are entitled to and what they want. The fact is that the league has conceded that they will be better off economically playing a season than not playing a season. And so far the league has not provided any underlying documents to support their economic claims. Meanwhile we continue to focus on the health and safety aspects of the league’s proposal.”