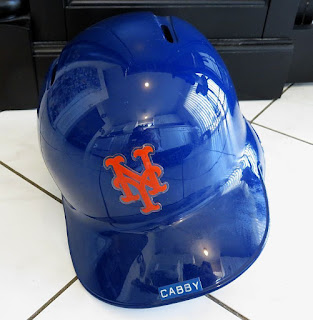 This auction is for an eye-catching "1986 style" turn back the clock batting helmet worn in many games during the 2016 season by New York Mets star shortshop ASDRUBAL CABRERA.  Cabrera put up very solid numbers in 2016, his first year with the Mets, winning over fans in droves.  In 141 games, Cabrera collected 146 hits including 23 home runs and 30 doubles.  He drove in 62 RBIs and batted .280 for the club, and was one key reason why the Mets made the post-season for the second consecutive year.

Cabrera, who is a switch hitter wore this helmet when facing left handed pitchers.  Most notably, he wore this helmet on Sunday, May 29th, when he homered off Clayton Kershaw of the Dodgers, perhaps the best pitcher in the game today!

The helmet is a beautiful royal blue Rawlings model with NY logo sticker affixed to the front.  It has a hard shell, thick padding and features a left ear flap.  It's a size 7 1/4 and has blue dymo tape on both the front and back, which reads "CABBY."  Inside the helmet are all of the Rawlings manufacturer tagging and labeling along with the size of the helmet in multiple places.  The helmet was collected after the 2016 season and was authenticated by Major League Baseball.  The MLB authentication sticker is affixed to the back of the helmet, next to the "CABBY" label.  The code on the sticker reads "JB 416906" which links to a record in the MLB database which states that he wore the helmet, and that it was collected after the final 1986 TBTC game of the year, played vs. Philadelphia on Sept. 26, 2016.

The helmet shows good use, with several nicks and dings.  Most notably, the front lid has bunches of checkered markings from his batting gloves, which likely had a coating of pine tar where he grabbed the helmet.  It was obtained by me directly from the Mets after the season ended and has never exchanged hands.  Cabrera's trademark throughout the season was being the guy who took the helmet off of his teammates' heads after they scored and returned to the dugout.  I thought it would be cool to have HIS helmet!  Unfortunately I never was able to display it... so I am offering it to someone who can!
Posted by MediaGoon at 1:00:00 PM