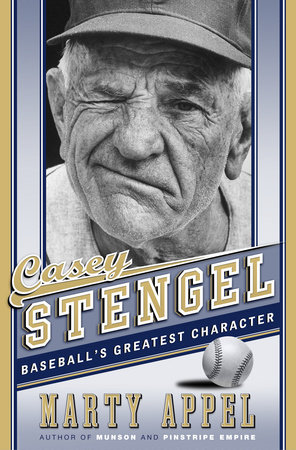 I have a promo copy for this that I'll be reading on set and probably on my way down to PSL.


Comes out March 28th... You can pre order here or at Amazon

"Stengel is unquestionably one of baseball’s most significant characters and Appel is the perfect fit to chronicle his life. One of the more skilled biographies baseball fans could hope for."
—Kirkus Reviews (Starred Review)

"Appel shows that, while Stengel was a showman and an entertainer, he was also an underrated baseball genius who earned the respect of multiple Hall of Fame players whose egos were as formidable as their on-the-field skills. Great subject and a fine biography, well-researched and sensitively written with just the right amount of humor."
—Booklist (Starred Review)

"This book benefits from firsthand accounts and historical perspectives that create an engaging story from beginning to end … Baseball history buffs will definitely want to add this biography to their shelves."
—Library Journal

"What a classic double play combination — the reporting brilliance of Marty Appel and baseball’s greatest character, Casey Stengel. There are too many terrific stories about Casey to keep count, but Marty manages to unearth them with great flare and humor. Casey Stengel is a treat for any true fan of the game. I loved every page."
—John Sterling, Voice of the New York Yankees

There was nobody like Casey before him. And certainly no one like him since. For more than fifty years, Casey Stengel lived baseball. First as a player, where he was the only person in history to play for all the New York teams, including the Dodgers, Giants, Yankees, and Mets — and then as a manager, for the Yankees and Mets, among others. He made his biggest mark on the game revolutionizing the role of manager, all while winning an astounding ten pennants and seven World Series Championships — including five consecutive titles with the Yankees. Playing with and against a “Who's Who” of Cooperstown’s finest including Babe Ruth, Christy Mathewson, Ty Cobb and forming indelible, and sometimes complicated, relationships with Yogi Berra, Joe DiMaggio, Mickey Mantle, and Billy Martin, Casey Stengel was, for an astonishing five decades, the undisputed, hilarious, and beloved face of baseball.

Yet for a man who spent so much of his life in the limelight, he still remains an enigma. In CASEY STENGEL, New York Times-bestselling author Marty Appel paints an intimate portrait of a private man who was larger than life and remains the embodiment of the national pastime. Featuring fresh reporting drawn from a trove of a never-before-published research documents and source material, including a previously unpublished memoir by Casey’s wife Edna, Stengel’s definitive biography is a must-read for every baseball fanatic’s library.