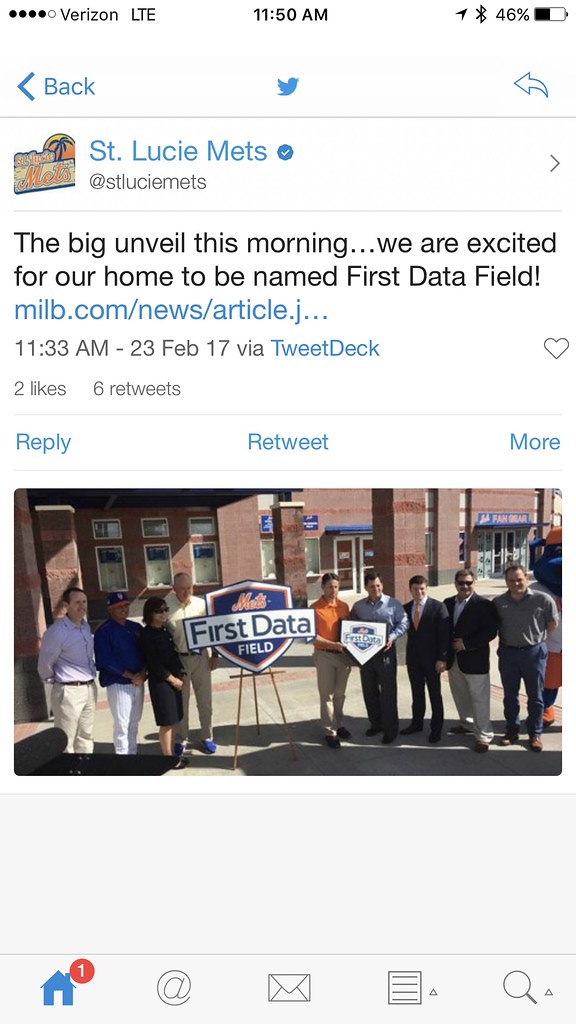 “It is an exciting time for our organization to have a world-wide leader in their field such as First Data to be our new naming rights partner,” said Mets COO Jeff Wilpon. “First Data is going to be a terrific partner of ours for years to come and we are thrilled to have their name on our stadium. All parties look forward to providing a great environment for Mets fans and the community.”

“We are proud to expand our partnership with the Mets, a world-class organization committed to winning on the diamond and providing an outstanding fan experience in the stands, whether at Citi Field or at First Data Field,” said Frank Bisignano, First Data Chairman and CEO. “While we root for the Mets under the Florida sun, our payments technology will help to power commerce for the Mets and their legion of fans.”

First Data is one of the world’s leading commerce technology companies, powering more than two trillion dollars in payment transactions for six million business locations and 4,000 financial institutions around the world. Last season, First Data sponsored the “Veteran of the Game” at each Mets home game. As part of that program, a Mets player presented the selected veteran with an American flag that had flown over Citi Field.

In 2016, First Data launched its sports and entertainment business, providing technology solutions for stadiums and arenas around the country through First Data’s Clover platform.

In November, the St. Lucie County Commissioners unanimously approved a new Facilities Use Agreement with the Mets to provide $55 million in renovations to First Data Field that will keep the Mets in Port St. Lucie for the next 25 years. Proposed improvements to the stadium will include an outfield boardwalk, a new entrance, new major league and minor league clubhouses, offices and locker rooms.

About First Data
First Data (NYSE: FDC) is a global leader in commerce-enabling technology and solutions, serving approximately six million business locations and 4,000 financial institutions in more than 100 countries around the world. The company’s 24,000 owner-associates are dedicated to helping companies, from start-ups to the world’s largest corporations, conduct commerce every day by securing and processing more than 2,800 transactions per second and $2.2 trillion per year.