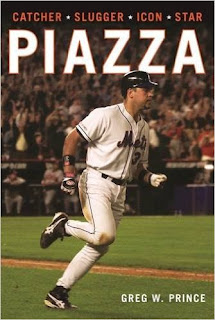 "Man, Goon is really doing a lot of Piazza stuff today." Great, you guys caught on today was a them day leading to this...

Greg Prince is one of the best writers around. I have enjoyed his books and his blog Faith and Fear In Flushing for a long time. If you love to read, love to read stuff written by a great writer and love Piazza, I am sure this book will be for you.


A franchise and fan base in perpetual search of validation finally had its ticket punched as 2016 dawned. Mike Piazza, who held records in one hand and a city’s rapt attention in the other, gained election to the Hall of Fame. Within weeks of this long-awaited announcement, the ballclub with whom he chose to cast his eternal lot, the New York Mets, made a date to retire his number.In Piazza: Catcher, Slugger, Icon, Star, Greg W. Prince—cocreator of Faith and Fear in Flushing, “the blog for Mets fans who like to read,” and author of Amazin’ Again, the story of the 2015 National League champions—explores the parallel paths Piazza and the Mets set out on in the early 1990s and how their individual journeys merged into a mutual quest for transcendence. From marriage of convenience to lifetime bond to a state of baseball grace reached only once before in team history, Piazza examines how the stranger from Los Angeles became New York’s favorite son and why Mets fans continued to rally to Piazza’s cause years after he took his final swing for them.