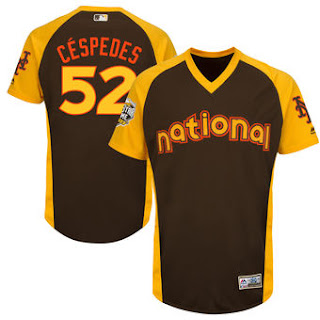 
Sure, the bad news is that Bartolo Colon has left town for the much greener pastures of Atlanta — as in $12.5 million greener, but the Mets now have that $12.5 million to help ante up for Yoenis Cespedes, a slugger who is going to be 13 years younger than Big Bart next season.
And they had better ante up. More money means one less excuse in their back pocket. This is about finally getting the Mets back to their Big Market roots.
The Mets continue to do the dance with Cespedes that will eventually lead to a four- or five-year deal. My guess is four years, $112 million.
There has been no real movement on the Cespedes front, and that’s a good thing because no other team is moving in for the kill, even though the Giants would be a terrific landing spot for Cespedes.


That could be all fine and dandy. As Mets fans do we think this is how that scenario plays out? Or, do we think that the Mets are going to let a few players walk away this year?
Posted by MediaGoon at 4:00:00 PM