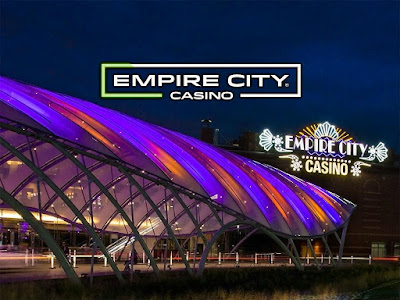 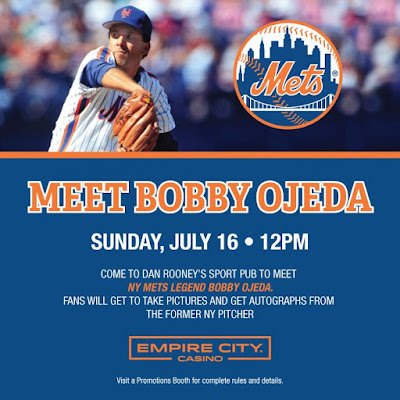 The left-handed starting pitcher was one of the anchors in the starting rotation of the ’86 champs that also included Dwight Eugene “Doc” Gooden, Ron Darling, and Sid Fernandez. His 18–5 record, 2.57 ERA (second-best in the league) and 148 strikeouts – all career-bests – played a major role in the Mets championship that season. Ojeda pitched in Game 3 of the World Series against his former Boston Red Sox teammates, and cruised to a 7–1 victory. Originally drafted by the Red Sox, “Bobby O.” compiled 115 wins and 1,128 strikeouts during a 14-year career that included a four-year stint with the Mets, as well as the Dodgers, Indians, and Yankees.
Food and drink specials will be on the menu, and fans will have the perfect view of the game on Dan Rooney’s 40 plus large-screen TVs.
About Empire City Casino: Empire City Casino is one of the largest entertainment and gaming destinations in the northeast. Featuring 5,300 of the hottest slots, electronic craps, three card poker, blackjack, roulette, baccarat and sic bo, Empire City Casino also offers guests  year-round harness racing and International simulcasting, live entertainment including the best party, tribute and Latin bands, comedy, New York’s hottest DJ’s, and more. A plethora of dining options will satisfy even the most discerning palate with Italian cuisine at Nonno’s Trattoria; Dan Rooney’s, a high-energy sports bar; Alley 810, a craft cocktail lounge with retro bowling lanes;  and  convenient delicious options at the International Food Court or Lil’ Cocina. Visit Empire City Casino at Yonkers Raceway located at 810 Yonkers Avenue (off I-87 at Central Avenue) Yonkers, NY, Westchester County, open seven days a week from 10:00 am to 6:00 am. Visit www.empirecitycasino.com or call 914.968.4200 for information.
About Dan Rooney’s: Inspired by the original Dan Rooney’s Cafe & Bar built and operated in the early 1900s in Pittsburgh by the family of Tim Rooney, president and CEO of Empire City Casino, the new Dan Rooney’s Sports Bar is warm, inviting and casual, featuring a Steelers theme, 40 large screen TVs to view the big games at every angle, dual flame rotisseries, private “snugs” for intimate seating, and two fireplaces.
Posted by MediaGoon at 4:00:00 PM