Mets: Thor Bobblehead Q and A with Joe Quesada 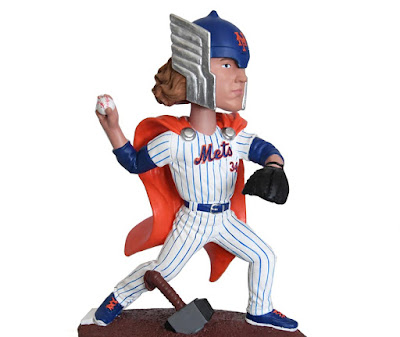 Joe is a huge Mets fan and I heard that he couldn't wait to get this done..

Q: What was the most challenging when designing the bobblehead and trying to combine Noah and Thor into one artistic piece?


JQ: The biggest challenge was to just make it look as cool and authentic as possible, especially when you have two ravenous fan bases who will let you know if you screw it up. From the grip on the baseball, to the look on Noah’s face to the flow of the cape, we worked tirelessly to really make this a special and unique item. Keep in mind, this is the first time we’ve ever done anything like this, having a player dressed as one of our characters, so we wanted to make sure we nailed it. Hopefully Mets and Marvel fans approve.


Q: How special is it to not only design a bobblehead after a baseball player, but also having it be a New York Met? As a follow up, how was it working on a project that involved a team that you have been a fan of for a better part of your life?


JQ: My father was part of the construction crew who built Shea Stadium, couple that with growing up in Jackson Heights and being a Mets fan is just in my family’s DNA, so yeah this is kind of special for me. But it’s not just me, we have an office here in NYC filled with Mets fans and season ticket holders and that’s one of the biggest reasons this project came into fruition. Now while nothing would be more gratifying than seeing my beloved Amazins win a third World Series (Ya Gotta Believe, right?), working on this Noah/Thor Bobblehead was a huge win for all of us here within the hallowed halls of Marvel who root for the Amazins! By the way did I mention that Peter Parker is a Mets fan?