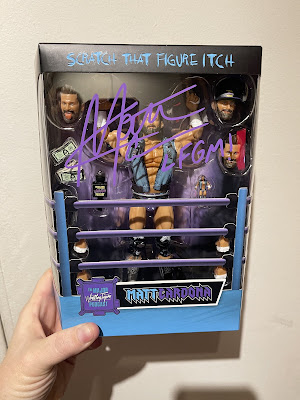 Matt Cardona and Brian Myers have a very successful podcast about Wrestling Figures and also other collectibles. The Major Wrestling Figure Podcast is an awesome show, lets you in on some inside Baseball of the wrestling business and also the collectible world. Matt and Brian even started their own toy company called Major Bendies. All of this while still wrestling. The fellas also do a stream on what not every Monday with Smart Mark Sterling where they sell items. They could be ring worn, stuff from their personal collection, or even autographed items. They both have Super 7 Action Figures of themselves and every now and then will do an auction on WhatNot where they will inscribe anything you want on the figure along with an auto. I was like what the hell, I’m and and when I won the Matt Cardona one, live on the WhatNot stream, I had Brian choose what Matt wrote. Of course to rib me Brian had Matt write LFGM! on it. You all know how I feel about the F in that. Also Matt had no clue what any of this meant. 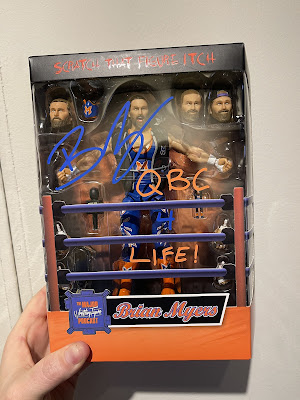 Brian had an auction up this past Monday to do the same thing. This time I was smart about it. Since Brian is a big time Mets fan and also enjoys the QBC, I figured why not do something cool and have him promote QBC on the street. I broke out the old school NWO 4 Life and had Brian switch it up a bit to QBC for life and he did it in Mets colors. Fun stuff

Check out their podcasts, YouTube channel and whatnot streams if you are like me and enjoy this stuff.