Have Two Grand to Spend? 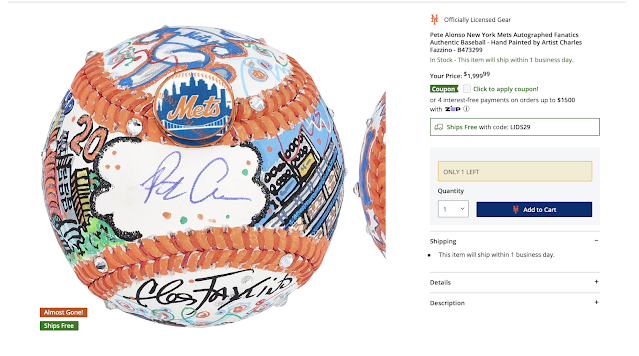 Description
Upgrade your collection of New York Mets memorabilia by picking up this Pete Alonso autographed baseball. This eye-catching ball features a hand-painted design by Charles Fazzino, which features a landscape of New York City buildings, Citi Field, several New York Mets logos and the team's mascot, Mr. Met, rounding the bases. Since making his major league debut with the Mets in 2019, Alonso has been one of the league's premier hitters. During his rookie season, he broke the team's record for most home runs by a rookie which was previously set by Darryl Strawberry in 1983. Over his first four seasons, he has been selected as an all-star twice, named All-MLB First Team once and won NL Rookie of the Year. There is no doubt he will be a key member of the New York Mets for years to come, so show your excitement by making this signed ball part of your collection.
Have $2000 to spare? You can buy this at lids.com.
Posted by Media Goon at 4:17:00 PM