A tale of two Jake Hagers

There’s is a pretty big crossover of Mets fans that are also wrestling fans. I wonder how many of them thought the same thing I did when the Mets announced Jake Hager. I was like what they signed the wrestler formerly known as Jack Swagger? Well anyway they didn’t and here are the differences between the bother of them if you are still confused. 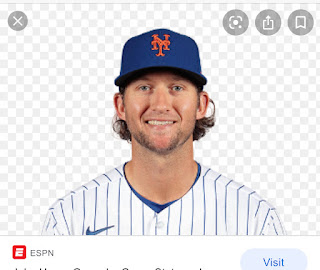 Hager attended Sierra Vista High School in Spring Valley, Nevada, where he was a four-year starter on the baseball team.[1] As a senior, he was the Nevada Gatorade Baseball Player of the Year after batting .547 with 11 home runs and 57 RBIs.[2] Hager was drafted by the Tampa Bay Rays in the first round of the 2011 Major League Baseball Draft.[3][4] He signed with the Rays rather than play college baseball at Arizona State University.[5]

On February 9, 2018, Hager signed with the St. Paul Saints of the American Association.[8] 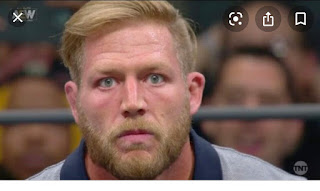 Hager attended the University of Oklahoma as a two-sport athlete, participating in both football and wrestling. He switched to wrestling full-time in his sophomore year, and in 2006, set the record for most pins in a season with 30 as an All-American. Following a try-out, Hager signed a WWE contract in mid 2006 where he performed as "Jack Swagger". During his time with WWE, he became a two-time world champion, having held the WWE's World Heavyweight Championship and the ECW Championship once each. He left the company in 2017 after he decided to pursue a professional mixed martial arts (MMA) career.

In 2017, Hager signed with Bellator MMA. He had his first professional fight on January 26, 2019 against J.W. Kiser at Bellator 214, where he won via arm-triangle choke in the first round. In his second fight with the promotion, he faced T.J. Jones on May 11, 2019 at Bellator 221, where he again won via arm-triangle choke in the first round. He is currently undefeated with a record of 3–0 (1). As a wrestler, he kept working with various promotions before signing with AEW in 2019, including in Lucha Underground as Jake Strong, where he was the final Lucha Underground Champion. He is the only man in history to have been ECW, (WWE) World and Lucha Underground Champion.[citation needed]

In 2006, Hager had a WWE tryout in Deep South Wrestling (DSW), and in September 2006, under his real name, he made his in-ring debut for DSW, defeating Antonio Mestre in a dark match.[3][10]

He competed mainly in dark matches before being moved to Ohio Valley Wrestling (OVW) in January 2007.[12] He debuted for the promotion by defeating Atlas DaBone, and in the following months began a feud with K.C. James.[13][14][15] Hager began teaming with a multitude of opponents to feud with James and his tag team partner Cassidy James.[16][17] During his time in the developmental territories he appeared as a security guard during a brawl between John Cena and Umaga on Raw.[8]

In August 2007, Hager was reassigned to Florida Championship Wrestling (FCW), where he began a feud with TJ Wilson.[8][18][19] On February 15, 2008, at the Florida State Fair in Tampa, Florida, Hager and Ted DiBiase Jr. were the final two men remaining in a 23-man battle royal to determine the two contenders for the FCW Florida Heavyweight Championship. Hager then defeated DiBiase to become champion.[3][8] On March 22, 2008, Hager went against the FCW Southern Heavyweight Champion Heath Miller in New Port Richey, Florida to determine the true Heavyweight Champion.[20] Both championships were on the line, and Hager defeated Miller to become the undisputed heavyweight champion in FCW.[20][21] He later defended the championship against Miller, TJ Wilson, James Curtis, and Gabe Tuft.[22][23][24][25]

During this time, Hager had a gimmick of having an undefeated streak in FCW.[3] His first loss came in the form of a Raw dark match, at the TV taping on August 18, 2008, when he lost to William Regal.[26]He also lost to D'Lo Brown in a dark match, before defeating Jamie Noble in a dark match prior to a SmackDown taping on August 29. He then lost the FCW Florida Heavyweight Championship to Sheamus O'Shaunessy on September 18, after debuting for the ECW brand.[21]

On October 2, 2019, Hager debuted in All Elite Wrestling (AEW) on the inaugural episode of Dynamite, aligning himself with Chris Jericho, Santana and Ortiz, and Sammy Guevara by helping them take out The Young Bucks, Cody, and Dustin Rhodes in the aftermath of the main event.[151] Led by Jericho, he subsequently formed a new faction with Guevara, Santana, and Ortiz called The Inner Circle. His in-ring debut match for AEW occurred on February 29, 2020 at Revolution, where he defeated Dustin Rhodes.[152][153] On March 25, 2020 episode of Dynamite, Jon Moxley attacked Hager after a match with Chico Adams.[154] Following this, on the March 31, 2020 episode of AEW Dark, Hager attacked Moxley as revenge.[155] The rivalry resulted in an Empty Arena No Holds Barred match for the AEW World Championship at April 15, 2020 episode of Dynamite, which Hager lost to Moxley, marking his first loss in AEW.[156]

Hope that clears it up for you guys. Could you tell I’m struggling for content?