Mayor deBlasio has come out in the past that he wanted ARod and JLO’s ownership group to be the ones who bought the Mets. His reasoning being that it would be great to have a Latin American Woman as an owner. That’s fine. You could feel that way, but Mayor deBlasio has no idea how much money it takes to run a team and how much money a proper ownership can bring back money wise to the city. The Mayor for some reason seems to hate NYC. From a lot of his policies he has imposed on the city, the way he thinks he is more important than his constituents, and how he pulls a lot of do what I say, not what I do type of things. Besides all that he wants to make his “mark” in history. I have yet to meet one person that actually likes him as a mayor. 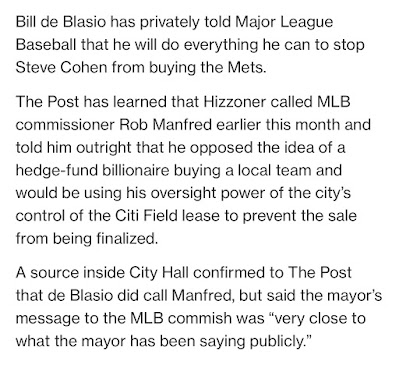 In my opinion I think the administration is trying to see what it can get out of Cohen for programs, donations, etc. I don’t know if it’s true or not but this could be a big political ploy but who knows. I might be crazy.

De Balasio wants Arod. Would Arod pass the moral turpitude clause? Don't think so. If Arod gets the team I stop rooting for the Mets.