What are fans saying about the Mets Black Jerseys now? 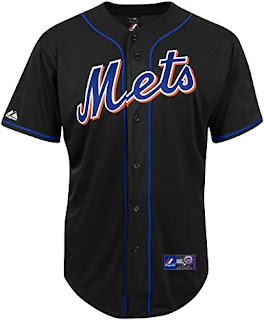 A lot of folks can't figure out why I was/am against the black jerseys. I have said that I was sick of the Mets wearing them so much over the timespan that they were in the rotation, black wasn't a Mets color, and the fact that with the exception of the Mets getting to the World Series in 2000(which they lost) the Mets never won anything in those Jerseys. They also make me think of the Wilpons and their money grabs and the collapses of 2007/2008. It just has a losing feel to me and a dark era over the Mets. I even felt that once the Black Jerseys came back that the bad juju would be back for the Mets. Now, I am not saying this is what happened but it is a real coincidence. Fans- " I can't wait for the black jerseys". Let's see what fans are saying now.

In all transparency, I bought Darren's T7L black Mets jersey. It was a fun mesh of 1986 and the black jerseys. I think I might have worn it 2-3 times out to a bar or a friend's house just to get double takes from friends.

Burn the black jerseys. They brought this bad voodoo.

Welcome to my way of thinking Brian.

Have they won yet in them???

Funny that since they started wearing them. Their season has been like going to a funeral

This made me really laugh out loud.

I loathe the black jerseys after this season! Bury Them After This Season

They never should have came back.

Team has played like garbage since these jersey came back.

I had a feeling this would happen.

I'll end with this one. There were one or two folks int he thread being positive about a win tonight but no one was positive about the jerseys. We have folks anti black jerseys now. We have folks calling for the head of Rojas. We have folks falling out of love with Uncle Steve. The Mets are do for a reboot season next year and hopefully they don't come back with cousins Coy and Vance.