What it takes to get “your” number off another player. 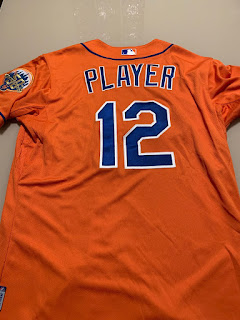 We have all heard crazy stories about what players do to get their numbers from other players. Some stuff is not so bad other ones are just “wow”.

Back in 2003, Tom Glavine's thinking was similar to Burnett's. In order to get No. 47 from Joe McEwing with the Mets, he also did something for his teammate's kid. Instead of just giving money to the player's family, though, Glavine financed the construction of a baby nursery in McEwing's home. Surely, McEwing reflected on how good a deal he made ever night when he put his kid to bed.

That’s a fun one. Imagine getting someone to basically build a nursery for you just for a number. Or how about a college fund?

Just like that guy at your office who "makes a donation in your name" instead of handing out a Christmas gift, some players direct money to other worthy causes in lieu of a direct payment for a uniform number. When A.J. Burnett joined the Pirates in 2012, pitcher Daniel McCutchen was wearing "his" No. 34. McCutchen and his wife were expecting a baby girl, so Burnett set up a college fund for his teammate's future daughter.

And Dom Smith was very altruistic 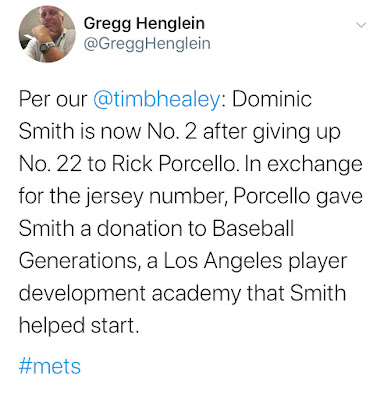 I guess you never know what it’s going to take to get “your” number. Read more here.
Posted by Media Goon at 7:53:00 AM