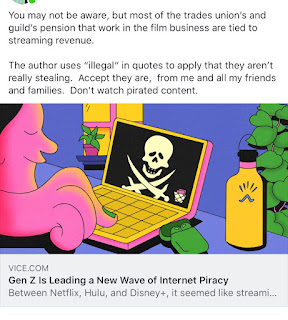 I’ve been trying to tell you guys about how buying  counterfeit jerseys and pirating movies are not victimless crimes. We have folks that work 70-90 hour work weeks below the line that pensions are tied to streaming revenue. BTW, you guys know there is a writer’s strike looming in a few months and guess what it’s about? Streaming residuals and compensation using streaming devices. There are many grips, electricians, set dressers, etc that pirating movies and tv shows hurt.

Attitudes towards streaming without a subscription seem to have changed dramatically. When Disney Plus announced its line-up on Twitter, I tweeted about how people forgot “illegal” streaming exists with many responding to me that I was a thief and stealing from artists—a response that just ten years ago I couldn’t have imagined.
Both Netflix and Amazon paid little to no federal income taxes in 2018, and Disney owns everything. If I watch something without paying sometimes, I’m not going to lose sleep over it. Consumers shouldn’t be held to a higher standard than companies worth hundreds of billions dollars. I would never pirate or stream a truly independent project that needs the money, and I still pay upwards of 40 dollars a month on streaming services. Still, I’m not going to buy a new service just to stream a few episodes of a show I want to start watching.

Maybe the writer should just keep writing for free and not worry about where here next paycheck is coming from? Maybe if she ever writes a book and when she doesn’t sell a ton but people have told her that they read it and the amount of people outnumbers the books being sold because folks are DLing from the internet she’ll get it. Yeah you might not be hurting the companies selling the the movies and TV shows but you are sure as hell hurting the people who work their asses off and rely on that income day to day and for the future.