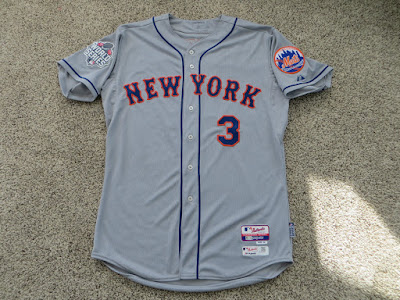 Now, know this: Duda’s a big Drake guy. Very big. Like, to an extreme. So I’d always get on his case because every song he wanted to hear would be Drake. But what surprised me at first was that Duda can go back. People don’t realize. He loves The Brothers Johnson, James Brown — like funk and Motown stuff. So if it wasn’t Drake, it’d be older jams … or he’d throw in a request for some Cypress Hill out of the blue. I mean, Duda will surprise you sometimes


Mr. Met is another thing — person? character? — that I’m really going to miss.And I’m not just saying that. I’m a big mascot guy.When I was with the Tigers we had one, but the Yankees don’t have a mascot. So coming over to Citi Field and being able to have fun with Mr. Met was something I really enjoyed right off the bat. (Shout out to Mr. Met. I’ll never forget you!)


So Grandy is the opposite of Syndergaard in more ways then one? He seems like he would be a fun, mascot guy.

Something I love about college sports, and about international sports, is seeing fan bases doing things collectively together, and the Mets have something like that going with the 7 Line Army. The fact that the 7 Line is able to take over entire stadium sections, both at Citi Field and on the road, is something that stood out to me right away. And those are the types of things that get you extra wins over the course of the season.
But it’s really the mix of all Mets fans that makes that fan base so special. And it’s been my absolute privilege to meet and get to know so many of those fans over the past few years.


This should make everyone happy that made mention of all fans and not just the T7LA. Grandy has been very vocal about T7L for a long time

Anyway, Granderson talks about his time visiting NYC as a Tigers player, playing in the Bronx, his time in Flushing, and now moving to  LA...

Read it here at the Players' Tribune
Posted by MediaGoon at 4:00:00 PM