Keith Hernandez Day had it all. 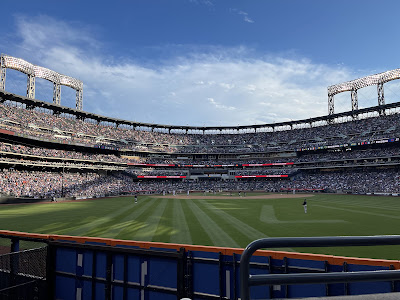 It was a hot and sunny day yesterday for Keith Hernandez’s ceremony. It also was a great turn out. The stands were packed with fans wanting to see Keith speak and his number unveiled next to the other great retired players/manager/visionary/broadcaster that already adorn the roof of Citi Field. Howie Rose led the ceremony and introduced Keith’s family. He then introduced, Mookie, Teufel, Ed Lynch, Darling, Gary Cohen, Mike Piazza, and Steve Cohen. The crowd was very into everyone announced and showed their appreciation for them. Piazza gave a nice concise speech and mentioned Gary Carter was looking down at them today smiling.
Keith gave an emotional speech and seemed not like himself. Emotional and nervous and happy. He had a hard time holding it together until he saw that he was rounding third and gave a great finish to his speech.
The ending of the game itself  “fit” perfectly for Keith’s day. It really felt like something you would have seen in 1986 with the throws  being bad and the Mets losing then winning on both those plays.
It was a fitting end to the game and the Mets organization should be proud of themselves for putting together a great day.
Posted by Media Goon at 6:50:00 AM