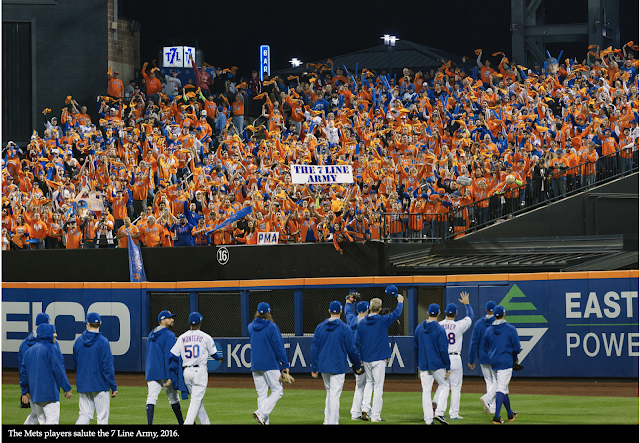 My wife and I were asked to be a part of this article by a buddy of mine Michael Stahl. Check it out.

" The Army, a diverse mix of white, Black, Asian and Latino fans, has been going strong for 13 years. Like any big, boisterous clan, there are occasional temper flare-ups, but its members have forged friendships so intimate that they’ve walked in each other’s wedding parties and attended funerals for departed relatives. They’ve yet to cheer their beloved Mets to a World Series title, but the group’s existence has led to countless connections, including quite a few love matches.

It all started when one depressed die-hard closed out a very typical New York Mets season by printing a snarky T-shirt.

The 2009 New York Mets season ended like so many others in the franchise’s history: with bitter disappointment. What made that year’s letdown particularly mournful was that it was the team’s first in its shiny new ballpark, Citi Field. The franchise and its fans had hoped for better results in their new $900 million digs. But their star players were starting to show their age, suffering injuries and performing below career norms. The cavernous dimensions of Citi Field were also blamed for an offensive power outage, as some of the Mets’ finest home run hitters struggled to put the ball in the seats. (Mets management has since pulled the fences in to help generate more home team offense.) Over time, the double smash burgers at the new stadium’s Shake Shack outpost garnered more attention than did the players on the field. Dejected fans left games early, more concerned with beating traffic than making it through another demoralizing ninth inning."

Great article and vey nice people found a place they like and fit in.

But blocking traffic is lawless. It makes all New Yorkers look bad when a group representing NY is classless and blocks traffic for blocks. What if somebody is running late for work or trying to get to a doctors appointment? Quite possibly scared some elderly drivers. What law abiding grown up would want to block traffic? How can Darren allow this or like this?

I am convinced if Darren said let's destroy this bar, a good number of his "army" would destroy the bar.

Almost cult like. Make the leader rich. Break the law with the group. Pay 33-50 percent more than face value and adhere to what the entire group is doing. Or else be asked "Dude what are you doing" as Darren asked Mr. Rincon.

And the topper is the leader has ruled you can't sell on Stubhub. Currently the cheapest NY Mets WS series tickets on Stubhubi s $1,600