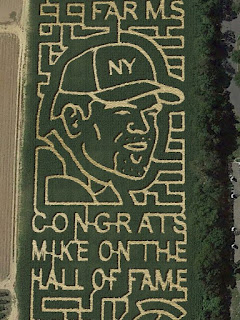 This is pretty cool.
From Mycentraljersey.com.


Over the years, VonThun Farms has had corn mazes recognizing other people, such as Jax, the Middlesex County singer who was on "American Idol," and Derek Jeter, the New York Yankees shortstop, although employees at the farm will admit to "being diehard orange and blue (Mets) fans," according to John LanView, an employee at VonThun Farms.
All of these mazes, which span over 1,000 feet in length, have been made by three men, without the use of tractors or aircraft.
The men are employed by a Utah-based business called The Maize Company, according to Cindy VonThun of VonThun Farms.
"No pun intended, but it's amazing how they do it," she said.
The Maize Company constructs hundreds of corn mazes every year throughout the United States, Canada and even overseas in the United Kingdom and Poland.
The three men came to the South Brunswick farm equipped with an 8-by-11 blueprint piece of paper and backpack sprayers, according to Cindy VonThun.

Read the whole story here.
Posted by MediaGoon at 7:22:00 AM